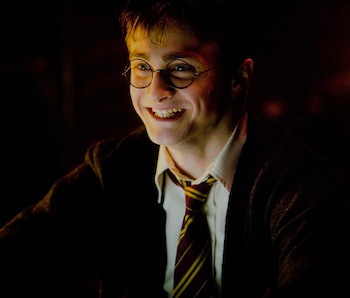 The biggest sitcom star of a bizzaro 1990s wasn’t anyone from Full House or Family Matters; it was Harry Potter. And thanks to a new Comedy Central short, we’ve got a look into the ‘90s-sitcom world that could have been.

In a hilarious video compiled by Comedy Central UK, the first two Harry Potter films are re-imagined as a ‘90s sitcom, complete with bouncy music and a credit sequence that spotlights all the characters. We’ve got a beaming McGonagall, Snape looking dastardly, and “introducing Dobby as himself.” It evokes Friends, Boy Meets World, Buffy the Vampire Slayer, a dash of Sister, Sister and some Full House, among others. Hermione just needs to wear a giant hair scrunchie and overalls while Harry and Ron have floppy hair and middle-parts.

Now, we know the video editors were just having fun, but in an alternate universe in which Game of Thrones existed earlier — proving to the world that there is a wide audience for long-form fantasy shows — this could have been a reality.

For the most part, the Harry Potter series avoided specific dates. If the Muggle world felt a tad outdated, we could assume it was because we were seeing it through the eyes of someone who was barely exposed to it, as Harry was never allowed to play with Dudley’s video games. It wasn’t until Harry and Hermione visited his parent’s grave in Deathly Hallows that we get a definitive date beyond a month: They died on Halloween night, 1981. Meaning, the “present” day in Deathly Hallows is 1997 even though we were reading the book in 2007.

It’s always a disconcerting moment to be reading a “modern” book and suddenly learn that the world is just a handful of years in the past. For first-wave Harry Potter fans, it was particularly jarring, since a large portion of the audience grew up with Harry, Ron, and Hermione. We hadn’t gone in assuming it took place in the past; therefore, to learn we were actually 10 years ahead was surprising.

Though, in retrospect, the Weird Sisters totally make sense as a band in the post-grunge era, and of course the long-haired motorcycle-riding Sirius would be considered a stud in the ‘70s.

If Harry Potter was a television show — and let’s face it, it’s only a matter of time before that happens — it would, in all likelihood, need to be darker than a sitcom. An hour-long drama would be more fitting, perhaps in the same vein as Game of Thrones or The 100. But it would indeed be set in the ‘90s. If Harry Potter and the Cursed Child had to involve time-turners, perhaps Albus and Scorpious should have forgotten about Cedric and traveled back to make the Harry Potter TV show happen instead.