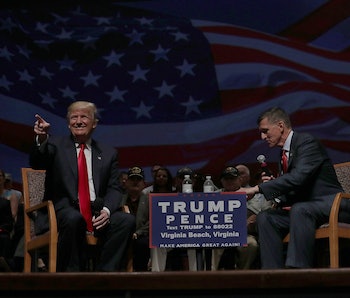 At a Virginia Beach rally on Tuesday, presidential candidate Donald Trump once again highlighted how little he wants to talk about cyber-security. “You know, cyber is becoming so big today,” Trump said.

General Michael Flynn questioned Trump throughout the hourlong interview. Flynn himself served in Army intelligence for over 30 years, and wrote a book called The Field of Fight: How We Can Win the Global War Against Radical Islam and Its Allies. Needless to say, Flynn knows a thing or two about ISIS strategy. So, naturally, he asked Trump about what he would do, as president, to defeat terrorism. Trump’s ability to sidestep questions without his audience raising even one eyebrow is breathtaking.

Flynn asked Trump this about ISIS:

To stay on ISIS a little bit, because I think this is an important topic, and it’s one of the national security threats that our country faces today: You have described, at times, different components of a strategy. Military, cyber, financial, and ideological. Can you just expand on those four a little bit?”

Well, that’s it. And you know cyber is becoming so big today. It’s becoming something that number of years ago, short number of years ago, wasn’t even a word. And now the cyber is so big, and you know look at what they’re doing with the internet. How they’re taking recruiting people through the internet. And part of it is the psychology because so many people think they’re winning. And you know, there’s a whole big thing. Even today, psychology — where CNN came out with a big poll. Their big poll came out today that Trump is winning. It’s good psychology, you know. It’s good psychology. I know that for a fact because people that didn’t call me yesterday, they’re calling me today. So that’s the way life works right?

Trump went on a long, self-serving tangent, as is his style, about this CNN poll showing that he was ahead in the race. The audience, unperturbed that he had failed to offer anything resembling a satisfactory answer, applauded this fact.

After 35 seconds, Trump remembered what he was supposed to be talking about — sort of. You can see him attempt to recall the original question, flounder for a moment, and then (somewhere in his mind’s fuzzy, cobwebbed recesses) hit the keyword: cyber.

And then he said this:

“But cyber has been very, very important, and it’s becoming more and more important as you look, and, uh, a lot of it does have to do with ideology and psychology and lots of other things. You know, we’re in a different world, today, than we were in 20 years ago, and 30 years ago.”