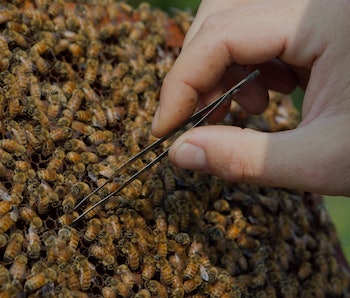 Millions of bees died in South Carolina’s Dorchester County last week after an insecticide was sprayed over the area by airplane in an effort to eradicate mosquitoes that could potentially carry the Zika virus. Unfortunately, there’s very little evidence that the spraying did anything to limit Zika’s spread, and it’s very likely that the honeybees died in vain.

The U.S. Environmental Protection Agency considers spraying the insecticide called naled effective in Aedes aegypti mosquito control, and safe for humans and the environment. Risks to bees can be reduced by spraying at night, and by giving beekeepers adequate warning to move colonies away from the area or housing them in covered, contained hives. Naled blanketed Dorchester County on a Sunday morning, and beekeepers were not notified in advance.

Even if measures to protect the bees had been in place, it’s hard to see what the justification might have been for the chemical spraying. Of South Carolina’s 46 confirmed Zika cases as of September 2, all were acquired by travelling to affected areas or through sex. That means there’s not a shred of evidence that a single Zika-infected mosquito is, or has ever been, inside the state borders.

In Florida, where mosquitos actually have tested positive for Zika, naled spraying remains controversial, and its benefits are in doubt. An investigation by Kaiser Health News found poor evidence for effectiveness of the insecticide as a Zika intervention. An opinion piece by Centers for Disease Control and Prevention officials published last month by the Journal of the American Medical Association cites a single, unpublished, non-peer-reviewed study as evidence of naled’s effectiveness in controlling Aedes aegypti. That research dealt only with immediate mortality and failed to measure the potential for mosquito population rebound. An official with the CDC told the Miami Herald that, in regions of the city where naled was recently sprayed but an accompanying larvicide was not used, mosquitos re-infested the area much more quickly.

Zika is legitimately terrifying. For people who are or are trying to become pregnant, the proven risk of stunted fetal development is a real horror. And the virus’s connection to Guillain-Barré Syndrome, rare as it is, would have anyone in affected areas reaching for the mosquito netting and the DEET.

But public officials must be expected to make policy decisions based on evidence, not fear. For an insecticide campaign to go ahead, the anticipated benefits should be weighed against expected costs. In South Carolina’s case, it’s clear the benefits were negligible and the costs — to a population of honeybees already threatened with global collapse — were enormous.