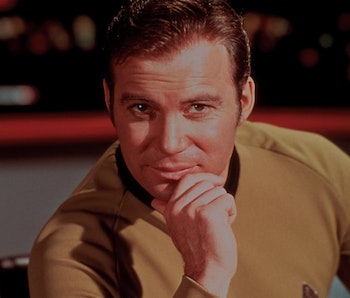 This weekend’s Star Trek: Mission New York event features several panels in which scientists from NASA and elsewhere ponder the science behind Star Trek and how our real universe might be even stranger and more fantastical than anything we’ve seen on our TV screens. Experts from the Bad Astronomer Phil Plait to NASA’s top exoplanet hunters have paid fond homage to all that Star Trek has meant — with some allowance for the show’s, well, let’s say flexible relationship with scientific accuracy.

And that love and respect goes both ways, as this video message from William Shatner shows. Jeff Volosin, the project manager for NASA’s planned Transiting Exoplanet Survey Satellite, shared a portion of “A Message from the Captain” at the start of his panel, and the whole thing is well worth the watch.

This isn’t NASA bringing in Shatner to read off some carefully crafted sales pitch about all our space program accomplishes. Instead, this sure appears to be the original James Tiberius Kirk extemporizing for two minutes and change on what he personally happens to find fascinating about NASA’s mission. As you would probably expect, there are some meandering moments, but Shatner snaps into sharpest focus when he’s talking about taking photos of Pluto and hunting for planets around other stars.