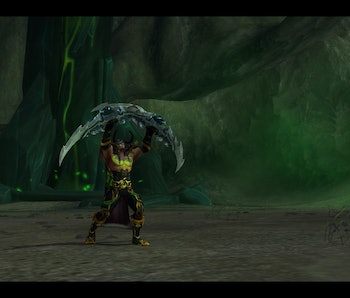 One of the best additions to World of Warcraft with Legion is the Demon Hunter, a new class focused on extreme mobility and the use of fel magic to power their attacks. These new fel-charged warriors are definitely badass, but they have a lot behind them too – which makes having a basic understanding important to playing them successfully.

Trained by Illidan Stormrage to fight against the Burning Legion, Demon Hunters are dedicated to destroying demons no matter the cost. Each Demon Hunter ritually blinds themselves in order to gain spectral sight so that they may see demons and augment their bodies with fel energy by absorbing demonic essence directly. This does come at a cost, however, because they are always fighting against the urge to give in and join the Burning Legion themselves for more power.

This sense of power and the struggle that comes with it is a theme that applies directly to your character in-game too. Each of your combat abilities and the animations that accompany them pull you in and out of a twisted, demonic form similar to that of Illidan Stormrage.

Compared to other classes, the Demon Hunter has a ton of customization options for you to choose from during character creation. While you may only be limited to Blood Elves and Night Elves when it comes to race selection, youll be able to choose a blindfold and a set of horns for your character, as well as a tattoo style and color. Each of these visual aesthetics haven’t previous been available, which makes them all the better. Don’t feel obligated to make the perfect Demon Hunter here however, because you can change everything but your character’s skin color at a Barber Shop later.

When you log in as your Demon Hunter, you’ll be limited to a few abilities that don’t do too much – but as you progress though the starting area you’ll slowly accumulate new ones to add to your arsenal by absorbing demonic essence from key targets. Each of these abilities revolve around Fury or Pain (depending on your specialization), which is the active resource you’ll be using in combat as a Demon Hunter.

Much like a Death Knights Runic Power and a Warrior’s Rage, Fury and Pain are resources generated in combat as you both deal and take damage. Your main source of resource generation will be the Demon’s Bite/Shear ability, which generates 20-30 of your respective resource on use and caps out at 100. This cap can be further increase through your Artifact Weapon and a few talents later on.

Fury and Pain are used to power a wide variety of Demon Hunter attacks and abilities, which will ultimately depend on your character’s specialization. Unlike the other classes, Demon Hunters only have two main specializations to choose from: Havoc and Vengeance.

Havoc will be your starting specialization and is automatically assigned when you start. This specialization focuses entirely on dealing damage while moving around the battlefield. With Havoc, your primary weapon is a set of warglaives and your active resource is Fury. While playing Havoc, you’ll also get access to a plethora of offensive abilities to use in combat such as Eye Beam, Blade Dance, and Metamorphosis.

Havoc is a specialization focused on making the most of your Fury pool while reacting to situations across the battlefield. What’s great about Havoc is it also provides you with a ton of movement-related abilities that allow you to navigate better than any other player, giving you an advantage in both dungeon and raid encounters.

While playing this specialization you’ll have a pretty easy rotation to follow. Your go-to attack will be Demon’s Bite in order to generate Fury, which you will then spend on offensive abilities like Chaos Strike, Blade Dance and Eye Beam. The damage of your abilities can further be boosted by Metamorphosis too – which grants additional attack speed and augments most of your abilities with more power for a short amount of time.

You’ll also get access to two movement related abilities in Havoc too: Fel Rush and Vengeful Retreat. Both of these abilities are excellent for maneuvering around the battlefield when combined with your double jump and glide. Plus, you can use them to get in and out of bad situations while dealing a moderate amount of damage.

Vengeance on the other hand, is a specialization focused entirely on taking damage and moving about the battlefield to contain dangerous situations for your allies. Vengeance Demon Hunters are the kings of mobility in raids and other encounters thanks to their double jump combined with Infernal Strike, which allows them to jump anywhere within 30 yards and deal a moderate amount of damage.

Currently, Vengeance is a specialization focused on a mix of healing and damage mitigation while dealing out massive amounts of AoE (area-of-effect) burst damage with their abilities. While playing Vengeance, you’ll get access to a set of warglaives as well, which further augment your damage and self-mitigation abilities.

Much like Havoc, your rotation will focus on generating and spending Pain (exactly like Fury) while saving enough for your active damage mitigation abilities in combat. Your go-to attack will be Shear in order to generation Pain, which you will then spend on Soul Cleave and Soul Carver. You’ll also want to use Immolation Aura to deal damage to enemies around you when it is available for use, as well as Sigil of Flame to place traps under enemies and burn them for additional damage.

Vengeance Demon Hunters also feature a unique mechanic referred to as Soul Fragments. When you kill a target there’s a chance that a Soul Fragment will spawn where they fell. This orb will sit on the ground nearby for 20 seconds or until you go pick it up, which will heal you for a certain amount based off your attack power. Abilities such as Shear also have the ability to create Lesser Soul Fragments too – which function exactly the same, but heal you for a smaller amount. Keep in mind that Soul Cleave can be used to consume all Soul Fragments within a 20-yard radius which prevents you from having to change position.

Regardless of the specialization you end up choosing for your Demon Hunter, you’ll be wearing leather armor and focusing on agility as your primary stat. As such, it’s probably a good idea to invest some time in both the Leatherworking and Skinning Professions in order to craft new equipment for your character every few levels.

There’s no doubt Demon Hunters are the most compelling addition World of Warcraft has seen for years due to their interesting backstory and excellent design. Not only do they have a direct connection to one of the most respected characters in the Warcraft franchise, but they revolve around a completely fresh set of abilities that flesh out completely new styles of play. So if you haven’t created a Demon Hunter or didn’t enjoy them the first time around, I’d highly recommend giving them another shot, no matter the specialization.