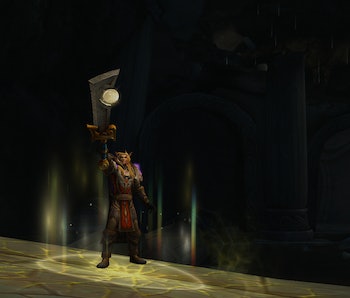 So you’ve picked up World of Warcraft’s latest expansion, Legion, and booted up your computer to jump into it. Odds are youre feeling a little overwhelmed and confused by some of the new features, but those will come with time. The one key thing you need to consider (above all else) is your artifact weapon due to the huge role it plays in your characters development during the early days of Legion.

Artifact weapons are one of the largest additions coming to World of Warcraft within Legion; they’ll serve as your main weapon all the way to level 110 as no others can match their power. These new weapons are legendary artifacts from throughout Warcraft history, wielded by the strongest and brightest champions Azeroth has ever known. The best part? You’ll be able to pick them up for yourself within the first hour of the expansion.

In order to obtain your first artifact weapon, you’ll have to complete the initial line of quests which teleports Dalaran over to the Broken Isles from Deadwind Pass. Once you’ve been welcomed by a member of the Kirin Tor, make sure to walk around for a little while. After a bit, you’ll be contacted by a prominent NPC representing your class. For me, that meant Lord Maxwell Tyrosus.

From here you’ll travel to Krasus’ Landing where you’ll meet fellow members of your respective class and then be presented with the class-based artifact weapons available to you. Each of these support a specific specialization, such as tanking or healing, and has loads of benefits in order to help you perform your role — but you can only choose to pursue one at the beginning of the expansion. Fortunately, you will be able to obtain every artifact weapon over time, so don’t worry about being locked to a specific one in the long run.

Once you’ve decided on one to pursue, you’ll begin a quest chain that unlocks it and introduces you to the Order Hall for your specific class. The quests are easily some of the best that Blizzard has created, laying the foundation of desperation that the entire expansion is centered around.

Each artifact weapon in the game contains a set of traits, appearances, and relics in order to help you upgrade and customize it to feel like your own. To unlock additional traits for your weapon, you’ll have to collect Artifact Power — a new type of experience present in Legion.

Artifact Power is obtained from various consumable items you’ll collect during your journey throughout the Broken Isles. It can be found as quest rewards, item drops, or bonus rewards scattered about the new content. You can consume the aforementioned items for a boost to your Artifact Power for your currently equipped weapon.

Artifact Power is shown on a bar located above your level experience bar. Each time you fill up this bar, you’ll have enough power to pick up a new trait for your weapon. Keep in mind that each of your Artifact Weapons must be leveled up through this process separately, although there are ways to increase the power you receive later on.

Traits are essentially skills for your weapon, similar to the old talents from World of Warcraft circa a few expansions back. Each of these traits cost a specific amount of Artifact Power and have multiple ranks, but the more Artifact Power you spend on your weapon, the higher the cost will go for the next unlock.

Most of these are passive in nature, increasing the effectiveness of abilities already accessible to you as a player, but a few are active abilities which can be slotted in your action bars and used in combat. Each trait has one to three different ranks which increase the effectiveness of the initial trait. In order to progress to a new trait, you’ll have to max out the one before it.

There is a total of 34 points to spend in your Artifact Trait Tree, but the order in which you progress is entirely up to you with the exception of maxing out specific traits along the way. Once you’ve attained all of the points for an Artifact Weapon, you’ll also unlock a bonus trait with 20 additional ranks that boosts your overall damage. It’s worth mentioning that you can refund any traits you’ve attained already for a hefty Artifact Power cost.

Relics operate in a way similar to meta gems from previous expansions and can be socketed into your Artifact Weapon to increase its item level as well as grant bonus ranks for specific traits on the weapon. When you first start, your Artifact Weapon will have two slots unlocked immediately for use while the third can be unlocked by completing your Order Hall questline.

You can obtain relics like you would any other piece of gear, and each relic has an item level associated with it. Once placed in your Artifact Weapon, these relics cannot be swapped in and out, but must be overridden by a new relic. It’s also important to note that relics will not bypass Artifact Power requirements for advancing your Artifact Trait Tree, meaning that you will still need to unlock remaining ranks of each trait to progress further in it.

As you progress through the expansion, you’ll also be able to unlock visual appearances for your Artifact Weapon by completing various quests and achievements in the game. What’s great is that you can also transmog your artifact weapon with other appearances too, although you cannot transmog a different weapon to look like your artifact weapon. “A square is a rectangle, but a rectangle isn’t a square” kind of thing.

Blizzard’s also planning to keep expanding the Artifact Weapon system over the course of Legion’s lifetime — meaning that new appearances, traits, and abilities will likely be added as time goes on. So, whether you love them or hate them, make sure to stay on top of your artifact weapons for each of your specializations. There’s going to be even more than this coming.