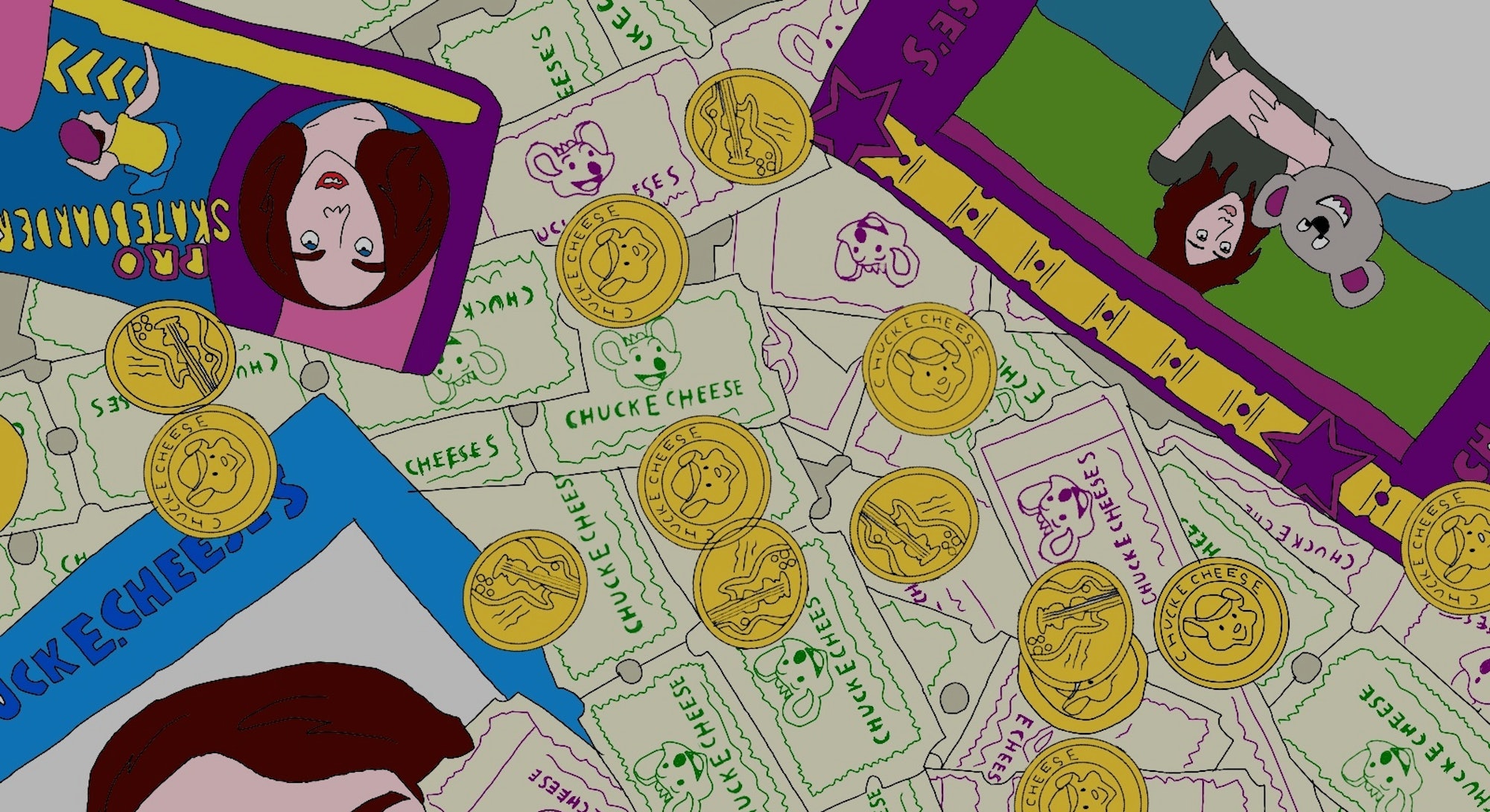 I can’t pass a Chuck E. Cheese’s without flashbacks to my ill-fated 17th birthday party, in which it took the bribing of three separate employees to slack on their policy of not allowing anyone over the age of ten into their hallowed halls without a child.

Times have changed, however, and they are — at least in theory — welcoming to childless kids at heart. In a pass at getting some new business, Chuck E. Cheese’s is pushing its new adult menu (with beer!) in addition to its famous (remember, kids, you don’t need to be good to be famous) pizza. The genius pitch: Upstanding, normal adults can go by themselves now, enjoy the wifi and a panini, maybe set up a few business meetings, and definitely not be an unsettling presence to every parents and employee in the joint.

Chuck E.’s has been chasing after millennial moms for upwards of a year, most recently through a bizarre new ad campaign where it’s implied that the moms want to bang whoever’s making the pizza at the children’s casino. Menu additions included churros, wraps, wings, gluten-free pizza, and a wider selection of wine and beer (though the two-drink limit abides.) Greg Casale, the head chef at Chuck E. Cheese’s these TV moms presumably want to bang, spoke to Bloomberg about the change last fall in chilling third person.

“Her kids know it’s a fun place to go, but millennial moms want to provide that great experience without sacrificing for themselves,” he said. “Before she was a mom, she was going to places like Panera and those concepts. She wants something that fits into her millennial lifestyle.”

And sure as anything, it hit me - maybe I could be that upstanding, normal adult that Casale was talking about, even if I’m not a mom. Maybe my entire life had led up to testing just how comfortable Chuck E. Cheese was with adults spending an entire day lingering outside the ball pit, without a screaming child in tow, doing normal upstanding adult business stuff.

So yeah, I went to Chuck E. Cheese alone on a Monday.

10:00AM: I arrive at the entrance of Chuck E. Cheese the minute it opens, only to realize that you need to be checked in and stamped at an entrance gate, which decimates my plan to slip in unnoticed.

“Just you?” asks the tired-looking teenager at the gate. I panic and freeze.

“I’m meeting my friend and her son Dylan,” I tell him. (Dylan was the boy I had a crush on in fourth grade who is really into bath salts now.) Not sure whether it’s because of the Dylan excuse or if it never mattered, but I’m in.

10:15AM: Lunchtime. The seven-year-old in me is screaming for the rancid pizza, but I promised I’d be an adult. I order a chicken caesar wrap, and I get the feeling that the cashier is trying to dissuade me from that decision with her eyes.

10:30AM: They have a really good beer selection here. Should I have taken an Uber? Should I have anticipated getting fucked up at Chuck E. Cheese’s?

10:45AM: The second customers of the day enter, a nanny and two kids. The little boy is the real star of the operation. “This reminds me of when I was a child,” he says, observing the arcade. He’s five.

10:46AM: The waitress delivers my Caesar wrap, looking like she wants to apologize.

11:05AM: I for sure am going to have a weird poop here after that Caesar wrap. It was so hot, but so cold, but so wet??? The nanny is not comfortable with having me here, but at least some early lunchers are trickling in.

11:15AM: There are a few different sets of kids and nannies here now so I’m just waving to no one and saying “Dylan, stop!” every couple of minutes. Still not sure if the employees think my friend or Dylan, both of whom are made up, are coming, and I still can’t tell if it matters or not.

11:30AM: I’ve decided to take a break. I’m feeling sensitive. I almost want to go bum a cigarette and cosplay as my dad chain-smoking outside a Chuck E. Cheese’s.

12:00PM: This time I walk in without anyone asking what I’m doing there.

12:30PM: Using the wifi and talking to my editor as children approach the massive Chuck E. that stands in the middle of the restaurant, it occurs to me how much the animatronic setup has changed since my dad chain-smoked outside the restaurant. Back in my day, there was a full five-robot setup that would sing contemporary hits, barely audible over the sound of their own mechanics, between Pink Panther cartoons. These kids were subjected to a single Chuck E., stripped of his coattails in favor of a purple t-shirt and cutoff shorts. Hipster Chuck E. is a rapper.

12:50PM: I remain hunched over my laptop, getting too many refills of Diet Coke and trying to muster up the bravery to buy tokens. I used some I found on the ground to play SkeeBall, and a seven-year-old laughed at me.

1:00PM: There’s some kind of token inventory going on and the employees keep laughing at me.

1:30PM: There is something starting in five minutes called the Chuck E. Live! show, a perky disembodied voice announces. It’s happened once already, but I missed it in a chicken caesar wrap digestive bout in a bathroom that smelled like a horse had lived there at some point. They keep showing a promotional video of a man dressed as an owl and speaking like Dracula. It is impossible to say why.

1:33PM: An employee begrudgingly costumed as Chuck E has arrived. He’s waving. I would not say he is walking so much as slouching.

1:35PM: False alarm, the live show is a tape. The animatronic appears to be broken. A VHS tape shows a far more enthusiastic costumed Chuck E. than the one sauntering around the restaurant being chased by kids dancing and singing about high fives. I am an adult woman and I am watching this alone.

1:38PM: “Aw, was it just on TV? Aww,” said the devastated boy sitting next to me, whose sister has wept for the duration of the show.

1:39PM: As the terrible video ends, the man in the Chuck E. outfit recedes into the back room, chased by two kids. For some reason, instead of waving goodbye, he backs silently into the room and shuts the door slowly. The kids wait outside for him.

1:41PM: The man who has just taken off the suit emerges from the room. The little boy says, “WHERE’S CHUCK E!” The man yells back, “DIFFICULT TO SAY!” Boy is satisfied with this answer.

2:16PM: OKAY I JUST SPOTTED ANOTHER CHILDLESS ADULT AND NOW I UNDERSTAND WHY YOU SHOULDN’T DO THIS. IT IS TERRIFYING.

2:22PM: I’m still working today, and just had to call a source while apologetically yelling over a Chuck E. Cheese rap. “Where are you?” asked the source. “AT MY NEPHEW DYLAN’S SWEET SIXTEEN!” I answered.

2:35PM: Time for the Chuck E. Live! show again. The song is called “Give Yourself a High Five” and this time I’m like, you know what? I’m gonna.

2:43PM: Okay, I’m only here for another hour and change. Time to play the games.

3:00PM: Upon investigation, these are the best games at Chuck E. Cheese: The photo booth where you get the picture with Chuck E. in the car, natch. The one where you throw balls and knock the clowns over. Nicktoons drag racing. Street hoops. Whack a mountain lion. I just blew through my tokens.

3:01PM: As I head back to my table, the same maintenance man beckons me over. This is it. I’ve been caught. I almost made it.

3:02PM: THE MAINTENANCE MAN GAVE ME FIFTY TOKENS FROM HIS POCKET OH MY GOD WE ARE SO CLOSE.

3:27PM: Over twenty minutes later, I am still talking to this maintenance man and am now convinced I am queen of the Eagle Rock Chuck E. Cheese’s. Here’s the deal: His name is Marcos and he’s worked at Chuck E. Cheese’s for 29 years, so he knows things. He lets me in on a few secrets: There are full animatronic setups, with the classic stage show, at the Pasadena location, if I want to drive out there (I do), and some messed up stuff happens at the Las Vegas Chuck E. Cheese’s. Does he like working there? “I don’t know,” he says. Fair.

3:33PM: I consider giving some of my tokens to the kids now swarming the arcade, but I decide not to. I deserve this.

3:40PM: I may have just pushed a kid to get to play street hoops one more time.

3:42PM: Why are they playing Simple Plan in the Chuck E. Cheese? Do people still like them?

3:50PM: As my time comes to a close, I hit the ticket muncher and have an astounding 354 tickets, with 30 tokens to spare. I get a child’s large t-shirt that almost fits featuring a skateboarding Chuck E. and I can’t stop smiling.

3:57PM: Marcos, my fabulous Chuck E. Cheese benefactor, hugs me goodbye. “You are a well-behaved adult,” he tells me, which I didn’t realize is the only compliment I’ve never wanted until I received it.

Being an adult at Chuck E. Cheese’s sucks, no matter the strength of the wifi signal (and it’s surprisingly good). The chicken gives you weird poop, the children make you nervous, and the employee who dresses as the eponymous mouse is clearly very depressed. Insisting on being a grown-up at a child’s casino is bringing a knife to a gun fight — sometimes, you need to lean in to what makes you look like a horrifying pervert, because it’s what is going to make you happier in the long run (exceptions apply).

Being an adult woman who lets herself be a child for a while at Chuck E. Cheese’s, on the other hand, could very well result in the best Monday afternoon of your damn life. If I hadn’t given in to the sweet call of the flashing lights covered in three thick layers of child slime, the day would have been nothing more than six hours of tense indigestion. When I did, my soul was set free (and yes, the parents got pretty uncomfortable).