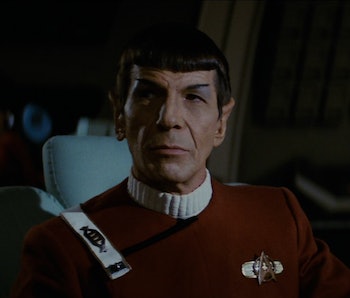 With Star Trek: Discovery bringing one of the most popular science fiction concepts back to TV next year, it’s totally possible that we will be getting another version of one of the popular fictional characters of all time: Spock.

Because the new Trek series is set a decade before the original series, it would make sense to have a little bit of Spock, but it would be awesome to have a lot of Spock. According to the original series episode “The Menagerie,” Spock was serving aboard the U.S.S. Enterprise at least 13 years before Captain Kirk took command. If Discovery really takes place a decade before the classic show and is set in the same “prime universe” timeline, then that means Spock is hanging out on the Enterprise with Captain Pike at the exact same time Discovery is happening. In a roundabout way, this is kind of resembles when Deep Space Nine and The Next Generation aired at the same time. Events were referenced and sometimes characters even crossed-over. Back then, it was a novelty, but now, having at least a glimpse of Spock on Discovery seems like a necessity.

Having Zachary Quinto play a young Spock in this context would also totally work. In the 2009 Star Trek film when Old Spock (Leonard Nimoy) time travels from 2390 to 2258, he recognizes James T. Kirk and Montgomery Scott as young men, even though these versions of the characters are played by Chris Pine and Simon Pegg. Similarly, Nero mentions that he knows Kirk’s face from Earth’s history, which would have been the history of the old-school continuity.

Obviously, there’s a bit of willing, suspension-of-disbelief action here, but it does establish that we’re supposed to believe these characters are physically the same people. The same way we understand that Saavik in Star Trek II is the same person from Star Trek III even though she’s played by Kirstie Alley in one movie and Robin Curtis in the other. (Other movies do this all the time, too. Rhodey was played by Terrence Howard in Iron Man but replaced by Don Cheadle in all remaining sequels).

Point is: Quinto is the current canonical Spock, in any version of the timeline you can imagine. Time-travel shenanigans in the first J.J. Abrams Star Trek movie didn’t physically alter the appearances of the characters. Instead, they look different because of the pesky inconveniences of contemporary actors form the 20th and 21st centuries being forced to portray people who won’t be born until the 23rd century. So, if Spock has so much as a walk-on in Star Trek: Discovery it should be Zach Quinto playing him.

At this point, you might be shaking your head with doubt. Why would Bryan Fuller, Nicholas Meyer and the Discovery team bring Spock into the new show at all? Wouldn’t his presence create a burden? Shouldn’t they be starting fresh with new characters? In short: No. Spock is too good for them not to include and if I were in their space shoes, I wouldn’t be able to help myself.

From a continuity standpoint, it would be super easy to have Spock involved in loads of big events we’d never heard of before. Why? Spock is good at keeping secrets and certainly wouldn’t offer information to anyone, unless he had to. For that reason, if Discovery shows the Federation in a full-blown war with the Klingons, Spock could be in an episode in which he goes undercover with Number One to the planet Kronos or something. In terms of possible plots, obviously, I’m just making shit up here. But out of all the characters in Star Trek, it would be extremely easy to layer-on some retroactive continuity with Spock. He kept the secret of what happened on Talos IV for over a decade, so who’s to say he didn’t have a whole bunch of other assignments from Starfleet in those days, too?

The other big reason to bring Spock onto Discovery is simply because he’s hands-down the coolest fucking character in all of Star Trek. Through Spock, you get a complete microcosm for what makes the concept of Star Trek so great in general; his human half is at war with his Vulcanness. Passion versus logic. The big questions of existence! You get it. Spock is like a space-age Sherlock Holmes with no drug problem, fewer biases, and a tortured soul. He possesses a literary lineage that makes him feel timeless, but also utterly unique. Spock wasn’t Joseph Campbell heroic archetype in the vein of Luke Skywalker, but instead, a newish type of science fiction protagonist. He’s the original thinking person’s hero, and Star Trek is the thinking-person’s pop adventure.

I have no doubt that the creative forces behind Star Trek: Discovery know what they’re doing. But if they don’t bring Spock onto the new show in the first season, it will only be because they’re saving him for season two. Anyway you look at it, it’s a good bet that you can start thinking about Star Trek: Discovery more like what I’m calling it in my head from now on: STAR TREK: SPOCK (PROBABLY) STRIKES BACK.