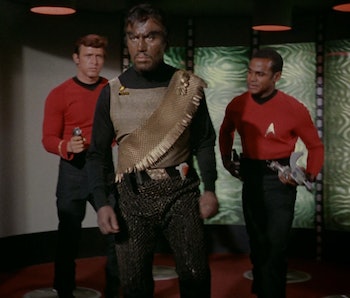 In the past several days, a slew of news about next year’s Star Trek: Discovery has emerged. Showrunner and Trek-writing alum Bryan Fuller has mentioned that the ship itself is a “work in progress,” the show’s lead will be a female “Lt. Commander,” and not a captain, the show will feature gay characters, and perhaps most significantly for diehard Trek-fans: Discovery will take place “around 10 years” before the original series and will begin with a very specific “incident.”

Fuller went on to say that the show will depict this mysterious event – which was mentioned in the original series but never fully explored. Further, he insisted that the incident is not the Romulan War, nor the famous Kobayashi Maru scenario. So, with a little bit of Trekkie-tea-leaf reading, it seems likely that the incident Fuller is referring to is probably a battle the Federation had with Klingon Empire at Donatu V! Because Donatu V is located near Sherman’s Planet, this big-deal battle was referenced in the episode “The Trouble With Tribbles,” and was one of the larger skirmishes between the Klingons and the Federation – which lead to the two powers being locked in a cold war. It happened shortly before the Captain Kirk era of the original series, so roughly, the timeline claim of “about 10 years before,” checks out.

Klingons’ involvement in Star Trek: Discovery has been rumored ever since Nicholas Meyer was brought into the writers’ room of the new show. It’s also been said that Fuller considered Meyer’s Star Trek VI: The Undiscovered Country a touchstone for the new show, a film which unsurprisingly is about Klingons and features the word “discover” in its title. Could the new show then be about a Starfleet ship pursuing a mission of peace with the Klingons in secret? We’re placing our bets right now: you’ll see massive Klingon on Starfleet action in obit of the planet Donatu V in the first scenes of Star Trek: Discovery.