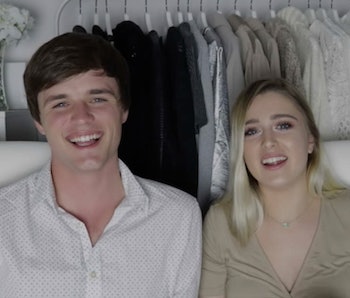 Sometimes when you see a corner of the internet, you can’t help but feel like it was invented to spite you into cancelling a first date. The people in the latest corner I have been visiting are shiny, beautiful, and all different colors, classes, shapes, and sizes. There is one infuriating thing that ties them all together: they’re full of hope for the future, when the rest of us know that there’s not always a good reason to feel that way.

But there they are, in all their glory, the married teenagers of YouTube.

For the most part, young married people waxing poetic on their vlogs is ultimately harmless (unless you hate optimism, which is valid). But it gets very complicated for kids who are selling an image of their teenage marriage and only keeping up appearances in the interest of paying their rent.

Let’s start with the good’uns — take Savannah Lewie, a young married vlogger who is living her best life with her husband, Braden. She presents one of the best cases of a seemingly level-headed young person who was deeply religious, wanted to get married, and happened to like YouTube.

Unlike more prominent users who profit from their marriage vlog, Lewie is open about her religion and marriage and supports herself without selling us a false image of a blissful life. In her videos, she talks about her jobs at Chick-Fil-A and a local bank in the early days of her marriage, the judgement she receives from the people around her about getting married young, coming from a divorced home herself and why she decided not to go to college.

“Obviously, Braden and I have only been married for a little over two years so it would be naive to say that I’m an expert on how to maintain a successful marriage throughout its entirety,” Lewie told us. “However, I do hope to encourage others who have married young or would like to marry young.”

Lewie is realistic, sticks by her convictions, and is the first to admit that her decisions aren’t everyone’s decisions.

“I’ve learned that it is so much more valuable to have some people who love you rather than a lot of people who just ‘like’ you,” Lewie said of her audience.

That is the complicated world in which Brianna and Jaelin White, two of the most prominent people in this (staggeringly large) community, exist. Another teenage couple, they create meticulously staged videos, and their tendency to wear all white in white rooms have garnered hundreds of thousands of views. The couple plugs various apps, makeup, and clothing in videos across their channel, which turns their broadcasts into something far less authentic.

The Whites have become the target of pretty severe internet hate after posting a video about finding themselves “homeless” (read: they moved back in with their parents) after a botched attempt to move to Chicago. The Chicago community and internet at large teased the couple for naively moving and then fleeing back to their home state of Arizona after one encounter with a homeless person at a Subway. They also got guff for their bewilderment at the concept of public transportation. People went as far as to set up a Brianna and Jaelin walking tour of Chicago, tracing the couple’s ill-fated trip to Subway before fleeing the city within 48 hours of their arrival.

It’s all pretty ridiculous, but I do wonder: Is the hate for Brianna and Jaelin in all their whitewashed glory justified, or are we beating on a couple of naive kids who have the odds stacked against them as it is?

Brianna and Jaelin are a pretty solid case study for the Married Teen Vlogger (MTV from henceforth) in its early stages, but they’re by no means the first of their breed. In fact, there have been a number of high-profile MTV breakdowns in the past, and viewers have had the voyeuristic, schadenfreude-charged pleasure of watching a picture-perfect marriage between sexy people melt before their very eyes.

But not everyone enjoys watching it — and experts find it straight up troubling.

“I could see how having regular accounts of experiences and feelings and discussing them could be helpful in a marriage in a therapeutic context,” Elisabeth Feeney, a former divorce attorney in Massachusetts, tells Inverse. “From a legal standpoint, I can’t imagine anything that would be worse.”

The teenage marriage success rate is as low as you would assume, though there are always the couples that defy the odds. Kate Figes, author of Couples: The Truth, explained to The Guardian in 2014:

“If they want an expensive party, to be center stage for a day, because they have romanticized notions of finding their ‘soulmate’, or want the imagined extra security marriage might bring, they could be in for a nasty shock, and a speedy separation,” she said. “On the other hand there are people who marry, say, their childhood sweetheart, or the person they fell in love with at university. They grow up together.”

So what’s the risk that the MTVs take when putting themselves on the line? While users like Savannah Lewie don’t take an income from her channel, she still deals with judgement and the inevitability of trolls. For the Whites and others (see: Aspyn and Parker), their livelihood is directly connected to the way they portray their marriage on the internet, and that’s where Feeney explains that this can be a setup for failure.

Elliot Morgan has been vlogging since early into his marriage, which was sealed when he was only twenty. He was one of many people to make an explainer video about getting married young all the way back in 2013, when Brianna and Jaelin were merely high school freshmen. Every pair of MTVs has this kind of video — the Whites have one, Savannah Lewie has one, and there’ll be a new one posted to the web today, more likely than not. But in Morgan’s case, this was a number of years ago, and while a marriage can certainly change during that time, the video is sealed in chrome.

Fast forward to present — Morgan has continued his successful career as a comedian and vlogger, and remained transparent about his struggles in life and in his relationship, exemplified in a recent post about a semi-breakdown. This isn’t a reflection on him or anyone going through something on the internet — in fact, it’s likely to become more normalized as humans, who will inevitably go through shit, continue to come of age with the world watching. But like the Whites, Morgan appears to be at least partially building a career on his channel, and increases the accountability of the messages he’s selling — particularly when an original conviction goes viral and is then dialed back on years later.

We’d all be embarrassed if the flinchingly sincere enthusiasm we had for the future as an 18-year-old was out there, being criticized by perverts hunkered down in their mom’s basement, comedians named Jamie who have massive student loan debt, or worst of all, peers their age. But when most of us were eighteen, betrothed to a jewel-eyed English classmate or not, we weren’t accepting sponsorships and endorsements from big companies like Brianna and Jaelin do. And when two (legal, anyways) adults are selling their life story in exchange for attention and peddling contouring brushes, then what they say becomes as eligible for criticism as the latest Selena Gomez album.

Feeney says that the consequences of making a relationship a public commodity can not only put strain on a marriage, but make it harder to end it in the long run. “A video account of all the bumps and curves in a marriage, and how you deal with them financially, [can complicate] any divorce proceeding for either party.”

Hang in there, kids.

More like this
Entertainment
2 hours ago
Onyx the Fortuitous and the Talisman of Souls is a cringe comedy as overlong as its title
By Andy Crump
Culture
Jan. 14, 2023
2,454 years ago, one eerily familiar event led to the downfall of Ancient Athens
By Rachel Hadas and The Conversation
Innovation
Jan. 19, 2023
A robot choreographer reveals why M3GAN — and all robots — should dance
By Molly Glick
LEARN SOMETHING NEW EVERY DAY.
Share: