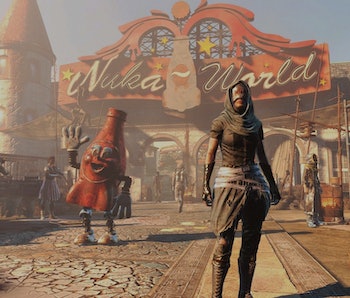 Congratulations! You’ve made it to Fallout 4’s Nuka-World, you didn’t get killed running the Gauntlet, and you even murdered the previous head jerk in charge (who had it coming, anyway). Now you’re the new Overboss, and you’ve got three factions of raiders who’re looking to you to get them on an even keel. Oh, and you’re going to need all the help you can get.

The first and arguably most important step in that process is taking back the various zones of Nuka-World. It’s a long, hard battle that will easily eat up three to five hours of game time. Here are a few tips to help you get through each section with minimal fuss.

First and foremost, the entirety of Kiddie Kingdom is awash in radiation. What’s more, the ghoul proprietor has set up radiation sprayers throughout the zone just to make your life a little more difficult. When you’re not trying to keep your hair from falling out, you’ll be getting barraged with a tidal wave of ghouls.

And don’t get cocky and think you’ll just steamroll through the rads and tackle the ghouls without worrying too much about, well, anything. Kiddie Kingdom is a labyrinthine mess that will get you turned around whether you like it or not.

Random side note: In the house of mirrors, the exit sign doesn’t lead towards the exit. Just, you know, heads up.

For the amusement park’s bottling plant and water ride, Bethesda has re-skinned some Mirelurks into something glowy-er and nastier: The Nukalurk.

The World of Refreshment is essentially just a hunting mission. Unlike other sections where you’ll need to restore functionality to some section of the park, here you just need to murder your way to victory. If you stick to the path laid out by the river that runs through the space, then you shouldn’t have any problem finding every Nukalurk.

When you’re clearing out the Nukalurks on the exterior — a chore you should save for last — be sure you’re always heading up. That way, when the Nukalurk Queen pops up, in the big open field just north of the bottling plant, you’ll be in a prime position to pummel her with explosives while you’re outside her range. Don’t forget to keep an eye open for Nukalurk Kings, though, and make killing them a priority.

The Galactic Zone mission tasks you with finding a minimum of 20 circuit boards scattered throughout the various rides and buildings in the section. It’s easily the biggest slog in the expansion. Think of it like the Pacific Campaign; you’ll fight for every inch of ground through a thick carpet of pissed off robots until you can find the 20 necessary Star Cores to reboot the mainframe and get them all to calm down.

The best thing you can do in the Galactic Zone is go slow, keep your eyes peeled, and bring someone who can pick a bunch of advanced locks. If you make sure to hit every locked door as you progress through the various buildings, you should be good.

It’s also a good idea to check out the control terminal of every ride scattered throughout the park. Those tend to hold a lot of Star Cores.

When you travel into Nuka-World’s hokey recreation of the Old West, you’ll be dealing with an infestation of ground worms that love to travel through the dirt and then fling themselves up at your feet. They’re one of the more obnoxious enemies Bethesda has concocted in their history with the franchise.

At any rate, if you just stick to artificial turf like wooden floorboards you should be solid. Then you’ll get to watch the bloodworms fling themselves high into the air in a fruitless attempt to eat your face.

Safari Adventure is overrun with a souped-up monstrosity known as the Gatorclaw. If the last bit of the name there brought to mind meaner versions of the Deathclaw, then you are absolute correct. Some dimwit geneticist created 21 of these awful, awful buttholes, and they are hell bent on ending you. So, however you deal with Deathclaws, bring that times five and you should be okay.

Bonus: If you’re cool with Cito, and you pass a mid-range speech check, you can —no joke — fight side-by-side with a gorilla.