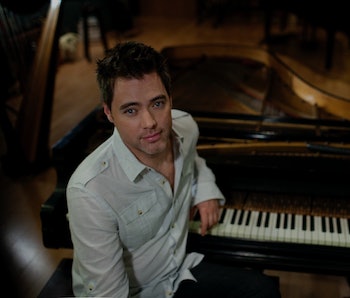 This week, we spoke with Robert Duncan, the Emmy-nominated composer who has scored Castle, Terriers, and the final season of Buffy The Vampire Slayer, among others. Most recently, Duncan scored the upcoming NBC sci-fi show Timeless and earned an Emmy nod for Outstanding Original Main Title Theme Music for The Whispers.

I obviously have to start with Buffy. What was that experience like, coming into such an established show during its final season?

That was really a great situation. It was, in some ways, my big break in Los Angeles. Up until that point, I was assisting other composers and doing an episode here or there. But Buffy the Vampire Slayer was the first series that I did a whole season of on my own. It was helpful that the identity of the show had been established. There was a solid groove for me to fit into, and it was helpful in getting up to speed. It really was the beginning of my career. After Buffy, I moved on to some pilots and discovered just how chaotic pilots can be when the show doesn’t have an identity. Of course, music is the last step in the process and you have to catch up from any scheduling overages in production or pre-production. And it’s also the last chance to change anything. If they want the show to have a different identity or to lean more toward comedy or drama, they often try to affect that change with the music.

How do you go about finding that identity?

The first question is, “How do we want the audience to feel about the show?” In some ways music is the wardrobe of the show. It expresses its personality. So it’s doing a bit of detective work to try to figure out how it should feel to the audience.

What’s involved in that detective work?

If it’s somebody I haven’t worked with before, I need to try to understand what their definition of good music is: If they have any musical allergies, what their ultimate vision is for the show. In some cases, a showrunner or producer may have a different vision than a studio or a network, so that can get quite complicated. Ultimately, the biggest difference between writing music for picture and writing music for music’s sake is that when you’re writing for picture, you’re a team player. You need to defer to the vision of the director, producer, and writer.

Is there any show in particular that stands out as a positive experience?

Buffy was fantastic. I was also very excited about a show called The Unit that was after scoring Buffy and then moving on to a few pilots and short-lived series. When I started working with Shawn Ryan on The Unit, it felt like the first project that I’d taken off the ground through four seasons, managing to stay on the air. I felt very proud of that show. One of the wonderful things about my job is that every project is different and brings new challenges. It feels sort of like creative babies, it’s hard to love one more than the other.

Looking back at your work on Buffy, is there any particular episode that you’re most proud of?

The very last episode. There was a massive battle and I knew they were going all out with sound effects and computer graphics. I wrote my heart out on that scene, but I knew that my music might get crushed by all the sound effects and sword clashes. But I had a chance to present my music to Joss Whedon prior to the final mix and he loved what he heard. When we got to the final mix stage, he sort of parted the sonic sea and let my music reach the foreground. I think I’ve had the most feedback from Buffy fans about that one piece, and that was Joss I have to thank for letting that shine.

And is there anything you’re most anticipating in the immediate future?

I’ve actually already scored the pilot for it, but I’m about to start the series for an NBC show called Timeless. It’s also from Shawn Ryan and the producer of Supernatural, Eric Kripke, and it’s about a trio that go chasing after a villain in a time machine. It looks great and it’s always been one of my wishes to score a period project. It seems that this show will give me a different period every week so I’m very excited about it.

And congratulations on your Emmy nomination for the main title theme of The Whispers, are you excited about that?

I’m super excited. This is my first Emmy nomination in the TV main title category and it’s a category that’s very special to me. When I was a kid first learning piano, one of the reasons I wanted to play was so I could play the themes for my favorite TV shows. The first piece of sheet music I ever bought was for a show called Hill Street Blues. I always admired the classic TV composers like Mike Post, that could really encapsulate the identity of a show in a song or a theme. So when I had an opportunity to do a 30-second intro to this Steven Spielberg project, The Whispers, and use orchestra, it was a dream challenge.