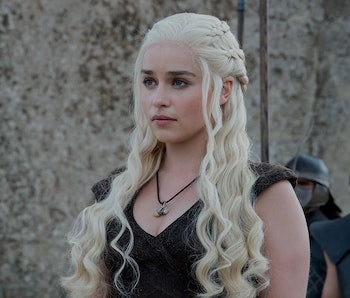 If you’re getting tired of the never-ending American election circus, good news: You can forget the real world and hop on over to the far-saner Westeros, because Game of Thrones just released a series of campaign videos for its various contenders to the throne.

There’s a Petyr Baelish video that included his infamous “chaos is a ladder” speech. Presumably he wants Sansa by his side as his VP. There’s a Cersei video called “Power is power,” that’s backed by her ominous voiceover saying, “show them what Lannisters are. What we do to our enemies.” Ostensibly The Mountain is her VP choice, as he is shown prowling in her wake. Then there was a Jon Snow video called “Serve the People,” that includes the glorious Lyanna Mormont pledging her support. A sound VP choice.

But the most recent video might win. The ticket is Danerys/Tyrion 2016, and we all know he’d crush the VP debate figuratively, even if The Mountain crushes it literally.

Surprisingly it does not include Dany’s “fire and blood” mantra but it’s backed by her infamous Season 5 “break the wheel” speech. While she is admittedly a less stable choice than Jon and a less excitingly unpredictable choice than Cersei or Petyr Baelish, between her time in Meereen and Tyrion’s Hand of The King background, this ticket comes with the most hands-on political experience.

And if you disagree, then what are you waiting for? All Men Must Vote.