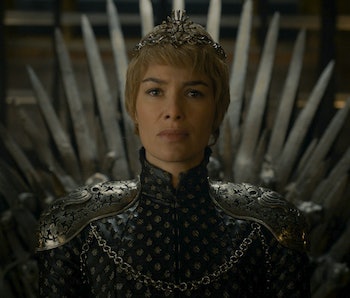 Cersei Lannister is a certifiable nutjob. In the Game of Thrones Season 6 finale, she took the concept of “sweet revenge” too far, brutally incinerating hundreds and gleefully sipping wine as they screamed. The event itself was not a surprise, but its execution was gloriously atmospheric; Cersei’s calm demeanor was chilling, and nobody could have predicted it would trigger Tommen’s suicide or Cersei’s ascension to the Iron Throne. Now that she’s sitting on the highest and least comfortable seat in Westeros, clad in Karl Lagerfeld’s villain collection, this can’t bode well. Or can it?

Let’s examine her competition. Besides Cersei, the two main claims to the Throne come from Daenerys, who is en route to King’s Landing with fire and blood in her eyes, and Jon Snow, the new King of The North and newly revealed true son of Lyanna Stark (and Rhaegar Targaryen).

As we have previously discussed, Daenerys is not a skilled ruler. She has a habit of invading places where she doesn’t know the customs, imposing her will on them, and leaving them worse than they were before. She has no actual experience with sticking around and getting to know the local customs — she said she would in Meereen, but look how that turned out. She took a detour to burn some Khals and Meereen went to shit.

Sure, with Tyrion by her side, she will have a better understanding of King’s Landing. But as we’ve seen time and again, she underestimates just how terrible a ruler her father was. Barrison Selmy had to remind her in Season 5; Tyrion reminded her in Season 6. The people of Westeros will not rush to embrace another Targaryen. And as we saw from Sam’s awkward family dinner in “Blood of My Blood,” ordinary Westerosi citizens like Sam’s brother don’t even believe that White Walkers exist. The presence of dragons will therefore cause mass panic among the ordinary people.

Jon Snow (Stark? Targaryen?) is the other logical choice, but he already demonstrated that he’s far too decent to be a good king. His actions in the Battle of The Bastards — putting himself at risk for the obviously futile hope of saving Rickon — showed that he still puts heart before brains, as does his move in the Season 6 finale to send Melisandre away. Sure, killing Shireen was a horrific act, but logically Melisandre is an invaluable asset. To win the Game of Thrones, one must be able to put cold logic before decency.

Jon is too damn heroic to survive in King’s Landing. He also is as unskilled at PR as ever and must rely on a 10-year old girl to fight his rhetorical battles for him.

Cersei caused panic by committing mass murder, but clearly the people are fine with a threat they know. They’ve dealt with Wildfire and conniving Lannisters before; they can do it again. As crazy as Cersei is, she knows how King’s Landing works. She’s cold and ruthless where Jon is too heroic and she’s got a better resume than Daenerys. This is not to say she’ll be a great ruler — poor Margaery would have been the best, or Lyanna Mormont. Westeros is well and truly screwed with her in power.

But of the three contenders for the Iron Throne, the crazy lady on it is actually a sounder choice than the two more idealistic young rulers. That’s the kind of food for thought that only makes sense on Game of Thrones.

More like this
Entertainment
Jan. 20, 2023
Legend of Vox Machina will continue — even if Dungeons and Dragons doesn't
By Eric Francisco
Entertainment
Jan. 26, 2023
Teen Wolf: The Movie is fan service done right
By Mónica Marie Zorrilla
Entertainment
Jan. 16, 2023
The Last of Us Episode 1 makes the game's best trick even better
By Dais Johnston
LEARN SOMETHING NEW EVERY DAY.
Related Tags
Share: