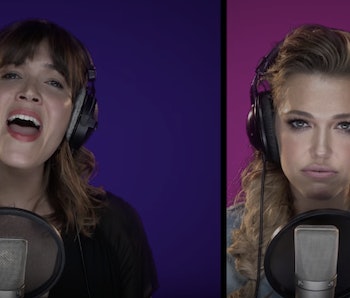 Poor Rachel Platten. Her breakout hit “Fight Song” has become the most hated song of the presidential race, thanks to Hillary Clinton’s campaign, which has adopted and massively overplayed the track as its theme song. It’s understandable that the song would garner the ire of even the most die-hard Clinton supporters after being played during all her entrances and exits, as an article about the song’s campaign-killing potential in Pacific Standard pointed out last week. But the sheer ubiquity of hatred directed toward the song points at a much more savage possibility: Is the song, simply and objectively, annoying?

Aurally speaking, the answer is an emphatic yes, according to Dana Gorzelany-Mostak, Ph.D., an assistant professor of music at Georgia College and the brains behind the website Trax on the Trail, which tracks and analyzes the music used during presidential campaigns. In particular, Gorzelany-Mostak, who was interviewed in Pacific Standard’s article, singles out Platten’s voice as the most irritating musical element in the song.

“More so than the other women represented on Clinton’s playlists, Platten’s voice is distinctly girly, and at moments has an almost whiny quality,” she told Inverse in an e-mail. “This trait gives the sing-songish moments in the song an even more juvenile feel.” She has a point: Just listen to Platten’s nasal, repetitive pronunciation of “fight song,” “life song,” and “alright song.” Platten’s vocal quality, Gorzelany-Mostak notes, has the same tone as a “pleading child.”

Platten is not alone. Earlier this year, the USA Freedom Kids, a group of preteen girls that sang at a Trump rally, were trashed by the media for being especially terrible (Stephen Colbert likened the performance to a “bald eagle marching on a Casio keyboard”). Granted, between the lyrics and creepy matching costumes, there was plenty to hate on — but Gorzelany-Mostak argues that “it was the presence of girl voices on the campaign trail that incited the most repulsion.”

Those sing-song, childish qualities of Platten’s and the USA Freedom Kids’ vocals aren’t, of course, objectively annoying, but our cultural associations with children’s voices — especially those of young girls — are hard to shake. We perceive girls’ voices as disruptive, annoying, and irritating, Gorzelany-Mostak says, suggesting that the public’s widespread rejection of Platten’s voice might be driven by these same perceptions.

That’s not to say those perceptions are justified.

As far as science can tell, there isn’t any biological evidence that girls’ voices are any more or less grating than those of boys, and yet we are unfairly critical of the former. Just look at all of the “vitriol,” as Gorzelany-Mostak puts it, directed toward the speaking voices of women — especially their apparently destructive use of guttural static, otherwise known as “vocal fry.” Meanwhile, there’s no dearth of studies showing that male voices are largely preferred, especially in leadership roles.

The point Gorzelany-Mostak is trying to make is this: Platten’s voice is annoying because we’ve decided, as a society, that voices like hers are annoying.

But you know what Platten’s voice isn’t? Anything like Clinton’s.

“Perhaps she chose Platten’s voice as a stand in for hers because she wished to show her vulnerable side, and humanize herself,” Gorzelany-Mostak explained, noting that Clinton has, equally unfairly, been called “cold, calculating, and too assertive.”

In this sense, perhaps Clinton and Platten have more in common than we might think. They’ve both been subject to unfair and arguably unjustified criticism at the hands of the strongly male-biased media because of their admittedly unique vocal qualities. Neither of them can do anything about it — their voices are their voices, after all — nor should they.

“If anything, the criticism directed towards Clinton’s voice, Platten’s song, and the USA Freedom Kids should push us to ask ourselves what types of voices and what performances of femininity are welcomed in public spaces and which are silenced, marginalized, or denigrated in order to maintain the status quo,” she says.

More like this
Entertainment
5.10.2022 9:30 AM
Doctor Strange 2 theory explains one Avenger's glaring absence
By Alex Welch
Science
11 hours ago
Is smoked food healthy? A nutritionist explains the potential risks
By Claire Cameron
Mind and Body
5.14.2022 11:00 AM
How to treat adult ADHD: A psychologist explains medication and more
By Laura E. Knouse and The Conversation
Related Tags
Share: