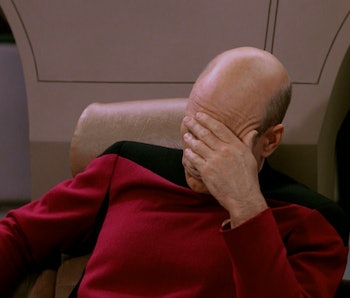 Today, to remind everyone about that time the British army burned down the White House back in the day, the Twitter account White House History tweeted a straight fire lithograph of flames licking the side of D.C.’s most famous home. Naturally, the official Twitter for the British Embassy immediately deployed the most effective space diplomat in history: Star Trek: The Next Generation’s Captain Jean-Luc Picard.

The White House History account is of course referring to the British sack of Washington D.C. during the War of 1812. It’s a bit uncomfortable for many Americans to admit, but we weren’t always the biggest and baddest military in the world. For a few years there in the early 1800s, the British totally kicked our ass. Of course, it didn’t take long to patch things up, and now the island across the pond is one of our greatest allies.

As if to reiterate that the people in charge of the “Special Relationship” are big old dweebs, the exchange continued, heading in a magical direction.

After White House History assured the British Embassy that the White House had, in fact, been rebuilt and that all concerned were “friends again,” theEmbassy responded with a Gif of Harry Potter giving a thumbs up in The Goblet of Fire. This was retweeted by many more people with bachelors degrees in political science.

While it’s true that as part of the War of 1812, the British burned down most of Washington D.C., including the White House; there’s no historical evidence that either magic nor time-traveling Star Fleet captains were involved.