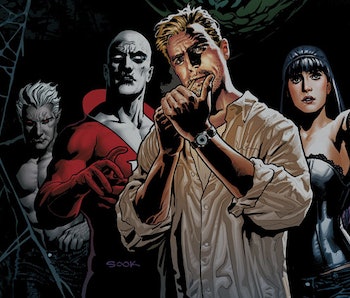 DC Entertainment and Warner Bros. are moving forward with their long-planned film adaptation for Justice League Dark, hiring director Doug Liman — which means Liman won’t be on board for Gambit.

Liman, was originally set to direct the Gambit solo film starring Channing Tatum, but switched sides from the Fox project to jump on DC/ Warner Bros. Justice League Dark, currently under the working title of “Dark Universe”. An adaptation of Justice League Dark has been in development for years, originally with Guillermo del Toro attached as director. Unfortunately del Toro had to leave the project for his other commitments, but if there’s someone who can infuse a dark, macabre sensibility into a superhero blockbuster, it’s Edge of Tomorrow director Doug Liman.

Justice League Dark stars a separate team of DC heroes who take on threats that have some kind of occult element to them. The team’s line-up includes John Constantine, Swamp Thing, Deadman, Etrigan the Demon, and Zatanna — the same characters that made up the original team in the comics. No word yet on casting, though it’s been argued many times before that DC already found their perfect Constantine in Matt Ryan, who played the character in the cancelled NBC series.

Liman is a veteran director who has worked on many projects, including The Bourne Identity, Jumper, and Edge of Tomorrow. The latter was an adaptation of the Japanese novel, All You Need is Kill, starring Tom Cruise as a soldier who must continuously relive a day on the battlefield, Groundhog Day-style, against an invading alien species. The film underperformed at the box office, but was a critical darling, praised for its surprisingly dark tone.

More like this
Gaming
5.19.2022 4:00 PM
MultiVersus could be the first Smash clone to truly challenge the throne
By Eric Francisco
Entertainment
19 hours ago
Why Moon Knight’s head writer refused to “go toe to toe” with Batman
By Eric Francisco
Entertainment
5.19.2022 12:48 AM
Doctor Strange 2 special poster reveals a terrifying deleted scene
By Jake Kleinman
Related Tags
Share: