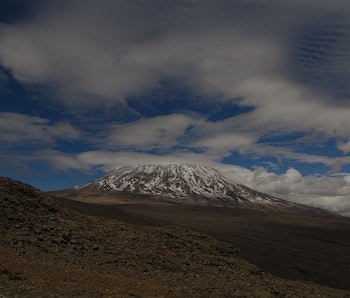 Exploration, adventure, and science have always been at the core of Star Trek. From The Original Series to the upcoming Discovery, it’s a Star Trek truth universally acknowledged that even as ships, crews, and conflicts change, what remains is the sense of adventure and the curiosity that drive advancement all over the galaxy. It was that sense of adventure, paired with the show’s constant pursuit of knowledge, that inspired Dr. Kayla Iacovino to become a vulcanologist.

You know, someone who studies volcanoes. (Yeah, we know what you were thinking. You were close. At least in the same way that Voyager was close to home for seven seasons).

“Star Trek influenced me to go into science,” Iacovino told CNNMoney last week. “[The show] revolves around the ideals of exploration for exploration sake, and the pursuit of knowledge for the sake of leaving the human race better than we found it; these are really noble pursuits. I carry that with me.”

Iacovino is a bonafide adventurer and badass. She isn’t just a scientist studying volcanoes from a lab; she climbs mountains and puts her life on the line to get up close and personal with the volcanoes she’s studying. In that way, what she does feels like it’s straight out of Gene Roddenberry’s creation. After all, it’s difficult to think of a series more emblematic of a dogged, adventurous commitment to science and discovery than Star Trek.

It wasn’t just the science and adventure that inspired Iacovino. It was Star Trek’s treatment of women (and female scientists, researchers, and leaders in particular) that stood out. Role models such as Kate Mulgrew’s Kathryn Janeway were proof that women had a place in the scientific community, even if those role models were fictional.

Iacovino isn’t the only scientist who’s been inspired by Star Trek, though. In fact, Star Trek’s influence can be seen everywhere from NASA to IRL phaser technology. When something is as influential and as pervasive as Star Trek has been for decades, it finds its way into the hearts and minds of creators, thinkers, and scientists across a number of disciplines. Just look at the concept art for NASA’s ship with a warp drive for proof of the show’s very real influence on the science world. Roddenberry’s work might not have had especially scientific roots, but it’s influenced a surprising amount of real-life research. We can’t wait to see how the new Star Trek: Discovery series might inspire a new generation of scientists, adventurers, and maybe even a few vulcanologists.