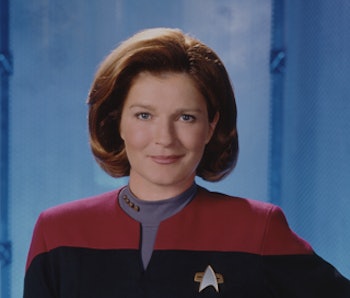 Considering the news that the forthcoming Star Trek: Discovery series from Bryan Fuller will feature a female lead (though she isn’t a captain like past protagonists), now is an ideal time to reflect on one of the finest captains in the history of Star Trek: Captain Janeway.

Janeway was the finest example of what it means to be a Star Fleet captain. She was kind and unwavering in her support of her crew, but she was never weak. She didn’t let self-doubt cloud her judgement, but she always was open to ideas. She was tough, yet fair. She was level-headed and deeply devoted to her mission to protect her crew and return them home safely.

Here are some of the things that made Janeway the best Star Fleet captain.

Long before The Rock was teaming up with Kevin Hart in a film to play a character who loves his unicorn shirt and hates bullies, Janeway was making her stance on galactic jerks known.

As a Star Fleet captain, Janeway was well-versed in diplomacy and had the utmost respect for the Prime Directive. But she also never shied away from a fight. When the situation required it, Janeway never hesitated to take on the Space Bully of the week head-on. She wasn’t fearless, but sometimes, she seemed pretty damn close. And speaking of diplomacy.

You can’t say she didn’t have a flair for “saber-rattling.”

Whether she was letting Harry Kim know that she preferred “Captain” or leading her crew with a firm but gentle hand, Janeway showed that women in the highest positions of power was hardly atypical in the Star Trek universe. Janeway never let herself be disrespected for any reason, least of all her gender.

When you’re the best, you should never be afraid to own it, and Janeway did her best to make sure we knew that.

Janeway didn’t love anything like she loved her coffee (black). Her obsession was deeply relatable and rivaled only by Loralei Gilmore’s.

Here’s hoping that whoever comes next in the Star Trek universe will carry on some of the best parts of Captain Janeway and bring them to a new generation of Star Trek fans.