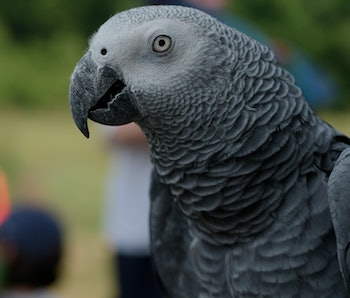 Paco the parrot — lover of apples and resident of Maine — is in trouble. The 10-year-old Timneh African Grey parrot has been missing since Thursday after being spooked off the shoulder of owner Oscar Cornejo. Some of Paco’s defining attributes include being charcoal gray, 10 inches tall, and possessing the ability to do a sweet R2D2 impression.

“He’s got some sass and attitude, but he’s got a sense of humor,” Cornejo told the Morning Sentinel. “If you hear a microwave beep or smoke alarm beep in the woods, that’s him.”

There’s still hope for Paco — while he hasn’t been retrieved yet, he has been spotted four times on the Skowhegan School of Painting and Sculpture grounds since he first flew off. And while it is assumed that it will be difficult for the domesticated bird to feed himself while on the lam, Paco is working with some relatively sophisticated intelligence.

Paco can speak a bit of English and Spanish while sounding like everyone’s favorite droid because parrots are especially talented vocal learners. Parrots demonstrate the most advanced vocal-mimicry among non-human animals, a skill they use as part of their “song system.” While in the wild it allows parrots to bond with their flock, much like other birds, in captivity they’ll pick it up from whatever social interaction they are getting, be it humans or household machinery. They are especially drawn to sounds associated with excitement and commotion, which is thought to explain why they like repeating profanity so much.

Researchers behind a 2015 PLOS One paper realized that parrots are better than other birds at mimicking humans because their brains actually contain a song system inside of a song system. While their “core” song system resembles those hummingbirds and other songbirds, they have a separate “shell” system as well. This is a neurological outer ring unique to parrots, but which researchers hope will eventually help humans understand our own ability to mimic.

African Grey parrots like Paco are especially intelligent. In 2012 researchers found the birds are capable of abstract logical reasoning, meaning that they have the reasoning skills of a 3-year-old human. So while this may seem like a captured-by-Jawas-for-space-junk moment for poor Paco, there’s a chance he’ll be reunited with Cornejo once again.

More like this
Mind and Body
Sep. 18, 2022
This common mosquito-borne virus can be deadly — and researchers don’t know enough about it
By Rebecca Trout Fryxell and The Conversation
Science
13 hours ago
Why do cats love cardboard boxes? Pet experts decode the obsession
By Tara Yarlagadda
Science
Sep. 23, 2022
We finally know how many ants are crawling the Earth right now
By Jennifer Walter
Related Tags
Share: