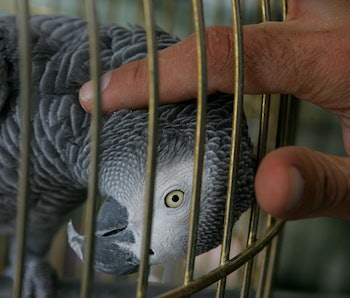 In May of 2015, Martin Duram was shot five times in his home. His wife, Glenna, was shot once in the head and survived. For the past year, police have been investigating their murder, but the latest clue in the investigation has come from Bud, the Duram’s African Grey Parrot.

A full year after the murder, Bud’s new owner (who is Duram’s first wife before Glenna), says that the 20-year-old bird still repeats something he heard the night of the murder. Parrots are excellent mimics who can be taught to speak any number of words and phrases, and often pick up on their owner’s favorite sayings.

Martin Duram’s parents maintain that the parrot is mimicking the last moments of their son’s life, which they say he picked up during an argument between Duram and his wife Glenna.

“That bird picks up everything and anything,” Duram’s mother told local news outlets. “It’s got the filthiest mouth around.”

And it’s not just Bud — many parrots often gravitate toward profanity. Parrots mimic human speech because they’re isolated from other birds — similar to how cats have evolved the “meow” to communicate with humans, parrots in the wild would have no need for human speech. But put one in captivity, and they’ll quickly start firing back things that they’ve overheard.

Basically, parrots mimic humans because they’re lonely. The Audobon Society also notes that parrots tend to gravitate toward profanity because they tend to mimic things sounds associated with “excitement or commotion,” which fits the bill for a murder scene exactly.

Duram’s wife Glenna is now a suspect in his murder. Bud’s “testimony,” as it were, isn’t admissible in court, but the investigation is ongoing. Here’s a local news broadcast, including Bud parroting back something that sounds remarkably like “don’t fucking shoot.”

More like this
Science
8.14.2022 1:00 PM
'Gifted' dogs may share this one personality trait. Does your dog have it?
By Tara Yarlagadda
Science
8.11.2022 5:00 PM
Look: A deep-sea expedition just captured these incredible views of life underwater
By Jennifer Walter
Science
8.10.2022 3:00 PM
Watch sea sponges sneeze out stringy mucus in slow motion
By Jennifer Walter
Related Tags
Share: