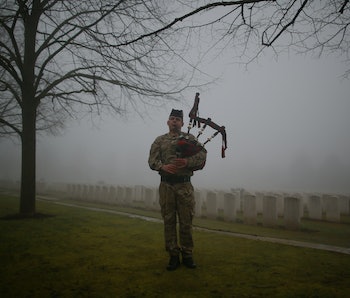 Bagpipes and funerals have long gone hand in hand, but the one has never necessitated the other until now.

In a new report published in the journal Thorax, researchers chronicle a condition called “bagpipe lung,” a condition that killed a 61-year-old British man in 2014. Unfortunate musicians contract the rare condition by breathing in the deadly mould and fungi that can thrive inside a set of uncleaned bagpipes, where damp conditions are perfect for their growth.

Bagpipe lung does not occur often, but the case study serves as a solemn reminder for wind musicians to clean their instruments often. The man described in the study developed a chronic inflammatory lung condition known as hypersensitivity pneumonitis after unwittingly breathing in fungal spores growing inside his bagpipes, which he played daily as a hobby. While his physicians diagnosed his condition early on, they didn’t figure out what triggered it until after the unlucky musician had died.

People usually develop hypersensitivity pneumonitis after hanging out in moldy houses, smoking excessively, or hanging out with pigeons (seriously). The man in the study did not do any of these things, leaving his physicians stumped. He had suffered from a dry cough for seven years, even after being treated with immunosuppressant drugs. As his condition worsened, he soon found it so hard to breathe that he couldn’t walk more than 65 feet at a time.

But the man’s condition improved suddenly when he took a three-month vacation to Australia and took a break from bagpiping. When he returned, seemingly healthier, his physicians swabbed his ‘pipes for fungi, discovering a range of species lurking in the instrument’s chambers.

By the time they were able to administer treatment, it was already too late. The man passed away, and his autopsy revealed that his lungs were thickly scarred and extensively damaged as a result of worsening hypersensitivity pneumonitis. There’s still not enough data to say, conclusively, that his condition was caused solely by the fungi growing in his instrument, but all signs point to the microscopic organisms as the invisible triggers.

This doesn’t mean you should throw out your bagpipes. Instead, honor the late bagpiper, who stuck by his reedy organ until the very end, by blowing a solemn round of “Danny Boy,” the time-honored funeral dirge and bagpipe classic. Just don’t forget to clean them after.

More like this
Mind and Body
Sep. 26, 2022
Going to bed before this time could boost your metabolic health
By Elana Spivack
Science
12 hours ago
China’s Mars rover finds new evidence of an ancient waterway on the Red Planet
By Doris Elín Urrutia
Science
12 hours ago
Baby Neptune-like exoplanet found via a strange new astronomical technique
By Joseph Malcomson
Share: