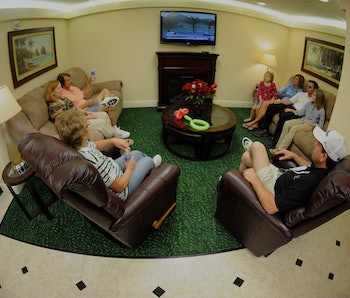 We’ve all felt the need to hunker down and binge watch TV, but research suggests all that screen time might be doing more to our brains than we realize.

A recent study from the Medical University of Vienna says that, much like reality television, fictional television programming affects one’s real life perceptions of the world. In this case, researchers believe that watching a lot of television means your sense of what’s “real” may align more with the reality of the shows you watch rather than the reality you live in.

Public health researchers Benedikt Till and Thomas Niederkrotenthaler surveyed 322 Austrian subjects about their television habits. They then asked the subjects if they believed that the death penalty still was enforced in Austria and if so, how many people are on death row. The results showed that the more television a person watched, the higher the probability was that they thought Austria enforced the death penalty — which, by the way, was actually abolished in 1968.

What underlies this result is the idea that television has the power to influence a viewer’s perception and knowledge of core aspects of society. The researchers believe that because American television dramas are so popular in Austria, and the death penalty is still legal in the United States, that Austrians assume it’s true in their homeland as well.

“The fact that more than one in 10 people think that Austria still has the death penalty is presumably due to the high proportion of American films and TV series on Austrian television,” Till said in a statement. “Detective dramas, in particular, continually portray the American justice system, where the death penalty plays a central role.”

The researchers also write that they think it’s fair to conclude television would spread other “myths and misinformation” about a variety of topics. This is in line with previous research, like a 2006 study that found that people who watch television couples are more likely to think their wedding will be the happiest day of their life and a 2009 paper that argues that Americans who watch crime dramas are most likely to have a distorted perception of the American criminal justice system.