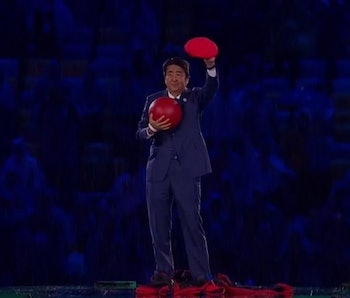 Japanese Prime Minister Shinzo Abe arrived at the Rio closing ceremonies cosplaying as the country’s most famous mascot to formally represent Tokyo as the host for the next Summer Olympics.

Typically at the closing ceremonies, the host nation for the next Olympic games in that season (i.e. Summer, Winter) will give a little presentation to publicly accept the IOC Flag. Since Tokyo is the host city for the 2020 Olympics, it’s no surprise that the Japanese leader would arrive to accept the honor as the next host city. However, nobody expected the leader to arrive in such style.

A short video presentation showed the Prime Minister back in Tokyo, worrying that he will be late to Rio. In a moment of desperation, he dons a Mario cap to turn into Super Mario, hops out his limo, pops into a warp pipe (cheered on by another Japanese mascot, Doraemon), and warps out onto the Rio Stage.

This easily ranks as one of the most memorable Olympic presentations in some time, showcasing Tokyo’s awareness of its global brand and the popularity of its homegrown characters. Super Mario is one of the most recognizable characters around the world, and Nintendo has been the face of Japanese game development since the company began producing home entertainment consoles such as the NES and Wii. Many people are surely already looking forward to the Summer games hosted by Tokyo in 2020.

More like this
Gaming
10 hours ago
The most daring Yakuza game is also the franchise’s best
By Willa Rowe
Gaming
8 hours ago
How to complete all the Velvet Room requests in Persona 3 Portable
By Willa Rowe
Gaming
6 hours ago
James Bond’s greatest game ever just hit Game Pass and Switch
By Mo Mozuch
LEARN SOMETHING NEW EVERY DAY.
Related Tags
Share: