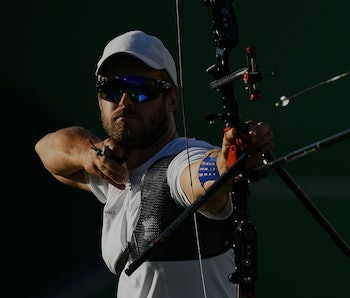 Imagine, if you will, that the Olympics suddenly became a bottle episode of television. The stadium is sealed, the cameras and audience are ushered out, and only one can survive to make it to the next Olympic city whose infrastructure will be destroyed by a single event in 2020. Who would it be?

Conventional wisdom says to place your money (and you’re sick for betting on this, by the way) on the weightlifters who can throw a punch, the swimmers who can ninja kick, or maybe the table tennis players who can spank you real nasty (not that I know, I’m just assuming). But the conventional wisdom is all wrong, you idiot, because the sole survivor will be sixteen-year-old gold medal American gymnast Laurie Hernandez.

Allow me to explain.

Laurie Hernandez not only has the intensely concentrated physical strength of a buff gazelle and charm of the entire 1996 dream team, she is smart and strategic in the way she deals with her image. My brand as a sixteen-year-old was “I don’t know what a brand is but I can’t afford the name ones,” but Ms. Hernandez is far more astute. She’s not going to upstage the teammates that are getting major love from the press, but chooses her moments carefully to let us know she is not messing around.

View: Laurie Hernandez initiating a flirtation with the universe.

Yes, Simone Biles literally defies physics, but she could never be the last to survive — she loves Aly Raisman too much. While this is a huge triumph for friendship, it is not the way to survive a Battle Royale.

Laurie is the youngest of the U.S. Olympics gymnastics team this year, which means she, the underdog, won’t be expected as the victor. She’s about the long game, but knows when to shine when the moment calls for it; look no further than nailing her beam routine this week when the team needed it, or the absurdly dynamic floor routine she performed. She’s supportive, but not vain, confident but not a media hound. At five feet tall and sixteen years old, no one would expect her to take down major Olympic athletes in the following ways:

Using Nancy Kerrigan’s kneecap as a discus, Laurie would behead every archery team on the planet. Boom.

Using a balance beam as a blockade, Laurie would trip every track and field athlete with the hubris to think that they could clear her turf.

Laurie would annihilate the world’s basketball players by disguising herself as a basketball and, upon being dribbled, kick her oppressors in the face.

Using advanced cyberbullying prowess, Laurie will cause all badminton and table tennis players to die of shame for daring to get away with playing such a dumb sport.

But there are some adversaries that are too powerful to take on alone - and that’s where Laurie’s hidden superpower really comes into play.

Laurie knows the importance of teamwork, and strategic alliances. While Simone and Aly were the spotlight this year, there’s no doubt that Hernandez is poised to be an even bigger star in 2020, and needs to protect her tiny bones of hollow steel until the moment is right. She’ll need a willowy group of impossibly strong bouncers who can conceal her small frame using only their torso.

The Russian Olympic synchronized swimming team is, objectively, terrifying. They dive, lift, and wear flawless caps as if their lives are depending on it, Cold War-style, and they very well may be. What would happen if they made a mistake? You can see the panic in the North Korean synchronized swimming team’s eyes, but even they cannot pry the gold from the elegant steel fingers of the Russian team.

Here is how Laurie and the Russians would retroactively tear down that wall of animosity and take out the remainder of the opponents.

The Russian synchronized swimming team would tip all canoes, not unlike Iowan teenagers tip local cows, effectively trapping them from victory.

Laurie would use the impossibly sharp fingernails of the Russian synchronized swimming team to cut the breaks of all Olympic cyclists.

All rowing contestants would be humiliated to death via a series of embarrassing spankings.

Laurie will handspring from the arms of the Russian synchronized swimming team into the sails of all sailing Olympians, effectively ruining their chances of glory.

Laurie and the synchronized swimmers will disrupt all wrestling matches by replacing the gymnasium with an Olympic sized practice pool. It is well known that any good wrestler cannot swim. It is not in their nature.

Finally, all Olympian equestrians will be brought down by Laurie and the synchronized swimmers whispering a number of conspiracy theories about horses not being given health insurance to the horses of the contestants, resulting in a massive strike that nullifies the sport for good.

Laurie, you may not have outflipped your teammates this year, but we all know who the true champ is. All hail.