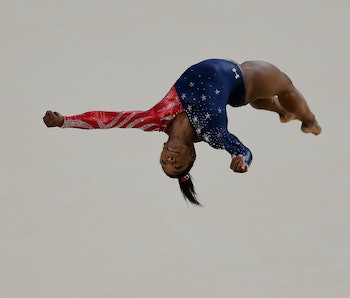 Watching U.S. gymnast Simone Biles land her gravity-defying signature move leaves you feeling disoriented. On what planet is it physically possible for a tiny young woman, not even five feet tall, to cap a series of rapid-fire somersaults with a single leap so high in the air it allows her to complete not one but two full revolutions, only to land solidly on her feet? The unprecedented move, named after its 19-year-old creator, has even physicists mystified.

Oregon State University physicist Faye Barras, Ph.D., was floored after first seeing footage of the move. “It’s incredible,” she told Inverse, mystified after roughly calculating the insanely high amounts of force involved in landing the jump. Here, she explains the physics behind the mystifying double half-layout with a half twist and a blind landing, which the world now knows as the Biles.

What’s the most physics-defying thing about the Biles?

During the layout, she does two singles, and then what it looks like is that she’s gaining angular momentum so she can do the turns. What I was amazed at is that last double layout. I mean, she has to get so much height there in order to be able to spin twice with her full body length extended. It looks, from the video, almost like she has to get her whole body height up, which is incredible.

How does she manage to spin herself around twice once she’s up there?

She’s got to get enough torque to spin fast enough to get around. What I thought was so cool was when she does the final half-twist, she brings in her outside arm in the most perfect timing to give her enough momentum to turn around.

What is the perfect time to bring in your arm to maximize torque?

It looks like she only wants to turn around as she’s coming down in the second half of the spin. She just brings [them] in as she’s coming down on that last time. How she keeps that all going when everything’s going so fast is incredible. Because as soon as she moves that arm, she’s going to start that spin, so she lands just at the right point. And if she’s too late, then she’s gonna land in the wrong position, et cetera. So, yeah, incredible.

How does she build up the kinetic energy needed to spring that high in the first place?

What’s incredible about that is that when she hits the mat, just before that jump, is that she has to get enough speed and kinetic energy up to actually reach that height — let alone do the spin.

I think she gets some of the energy from her first two turns. Think of a bouncy ball — it’s going to bounce back up a little bit. But because she still has to get higher than her previous jumps, she’s really got to put a lot of strength on there. If you look at her muscles, there’s no way she’d be able to do it without those.

And after reaching the peak of that pass, where does all that force go?

Now she has to absorb all that as well as the turning energy. She’s stopping herself turning, and absorbing that. She bends her knees, so that kind of spreads out all that energy. She absorbs it. You can think of it as spread out over a bit of time and a bit of space. I wouldn’t think she’d do that on a hard floor.

But just the amount of force on her feet and knees as that’s happening is — I was just doing a rough calculation, and my number seemed way too big. It seems almost like a ton or more of force, which seems way too big. It’s possible I made a bad calculation.

She definitely looks taller, especially with her great extension. But that also helps, because a taller gymnast would have to jump higher. She’s got such great extension, at least in the videos I’ve seen.