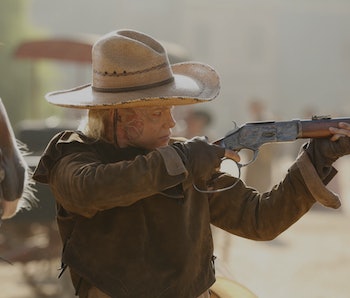 HBO’s Westworld is coming on Sunday, October 2, and the first round of on-set photos make the dystopian western adventure park look like a beautiful, deadly playground for futuristic cowboys.

With the new season of Game of Thrones on the back-burner until summer 2017, HBO is relying on J.J. Abrams and Jonathan Nolan’s update of Michael Crichton’s 1973 movie to be the network’s next water-cooler phenomenon. The show, about a technologically advanced amusement park with a bunch of evil robots in a faux-old west setting, has been a difficult ride. Production setbacks and on-set controversy have painted a potentially dire picture of the show.

A press release from HBO announced the premiere date along with the particularly cryptic official synopsis:

Westworld is a dark odyssey about the dawn of artificial consciousness and the evolution of sin, exploring a world in which every human appetite, no matter how noble or depraved, can be indulged. The one-hour drama series kicks off its ten-episode season Sunday, Oct. 2 at 9:00 p.m. (ET/PT), exclusively on HBO. Created for television by Jonathan Nolan and Lisa Joy, both of whom are executive producing and writing, with Nolan also directing, the series was inspired by the 1973 motion picture “Westworld,” written and directed by Michael Crichton. Executive producers J.J. Abrams, Jerry Weintraub, Bryan Burk.

Before now, the show’s teaser trailer was pretty much all we had to go on.

But just in case that isn’t enough to sell you on the idea of technology gone wrong, the gorgeous new photos should persuade you.

Like an even more bizarre Hogwarts Express, this train seems to be the way guests travel to Westworld.

Marsden has always had a pretty face, and it seems like he’ll maybe take over the Richard Benjamin role from the original. Marsden’s character is a newly arrived guest at Westworld who suddenly finds out there’s more to it than just being a cowpoke. Evan Rachel Wood’s character is a western girl who suddenly finds out that she’s a robot, which would fry anyone’s circuits.

Though it isn’t specified, Harris’s character takes over the villain role made famous by Yul Brynner in Crichton’s film. While that character was known as “The Gunslinger,” Harris’s bad guy is known simply as “The Man in Black.” Even Johnny Cash would be concerned about this dude.

Berdal’s Armistice character is described as “a savage fighter and brutal bandit,” and she’s got the intimidating face-tats to match.

Newton’s character looks to be living dual lives as a robot. In this photo she looks like a down-home frontier mom (of a kid who is probably also a robot).

But here, with Rodrigo Santoro’s wanted outlaw character, she’s inhabiting the role of the robo-madame of Westworld.

This photo shows Westworld mastermind Robert Ford observing one of his creations with Bernard Lowe, the park’s head of programming, played by Jeffrey Wright.

Someone’s gotta make sure the park is up and running, even though it will inevitably fail. Sidse Babett Knudsen, who you may have seen in director Peter Strickland’s S&M drama The Duke of Burgundy, plays the park’s chief of operations along with Shannon Woodward’s programmer character.

This scene is the flip-side of a conversation seen in the teaser trailer. In it, Ford confronts one of the robots, who he suspects of being self aware. Knowing Abrams and Nolan’s proclivities for philosophical sci-fi conundrums, you can definitely plan on seeing more of these kinds of scenes throughout the show.

Westworld premieres on HBO on October 2.