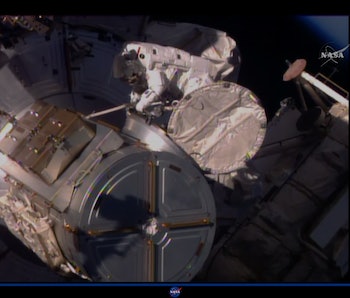 The era of space shuttles visiting the ISS is making way for a new one, where private companies visit with their own crafts. On Friday, that dream came one step closer to reality, as two NASA astronauts, commander Jeff Williams and flight engineer Kate Rubins, undertook a spacewalk to attach a new international docking adopter (IDA).

The adopter will allow spacecraft like the Boeing CST-100 Starliner and the SpaceX Crew Dragon to dock with the ISS. SpaceX delivered the IDA last month, its ninth mission with NASA.

In May, Boeing announced a launch date of 2018 for its first Starliner manned flight. The pressure is on SpaceX to beat Boeing to the punch and send its first crew to the ISS, a race that officially started Friday with the dock installation.

Friday’s mission was a long time in the making. By Fincke’s reckoning, it started developing tools about a year ago, and astronauts have been preparing for the spacewalk over the past few weeks. Rubins, on her first walk, is the 12th female astronaut ever to walk in space. This is Williams’s fourth spacewalk. Overall, it’s the 194th spacewalk in support of space station maintenance and assembly.

“It’s a little bit like a synchronized swimming operation,” said Rubins in a video ahead of the walk.

The IDA opens the door to commercial space travel in a big way. “That is the next major chapter,” said Williams.