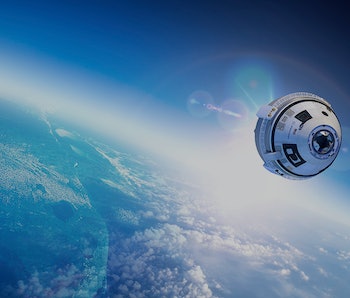 At a briefing for investors today, Boeing announced a slight shift in the schedule of its highly anticipated CST-100 Starliner space taxi. The schedule change will see the planned unmanned flight for 2017 proceed as intended, while the first manned flight’s launch will shift into 2018. While the announcement was not expected during the briefing, it only presented a small delay: the manned flight was originally set for December 2017.

The Starliner is Boeing’s entry in an ongoing race to send civilians to space against SpaceX. The intention of the Starliner is to ultimately ferry astronauts to and from the space station for NASA; the ship’s contribution to the world of space travel could help seriously advance technology toward civilian space travel.

“We’re working toward our first unmanned flight in 2017, followed by a manned astronaut flight in 2018,” said Boeing’s Executive VP Leanne Caret. Caret also serves as president and chief executive officer of Boeing’s defense, space, and security division. The space taxi is meant to hold up to 7 astronauts, with cargo, and will reportedly cost less than what Russia is asking of prospective Soyuz capsule missions.

The shift may not be much of a surprise, but at the moment, SpaceX is tracking toward first place. SpaceX’s Dragon is already completing cargo missions from the space station, including one earlier today. With victory in its sights, the crew of SpaceX’s first manned mission will take home the U.S. flag left aboard the station by 2011’s shuttle crew.

Regardless of the delay, Boeing CEO Dennis Muilenburg discussed his enthusiasm for the company’s next five years, describing the company’s goal to hit profits in the teens by the end of the decade. Earlier this month, Boeing’s team built a structural test for the Starliner, and astronauts have been undergoing training in Starliner flight simulators as preparation for 2018 continues.