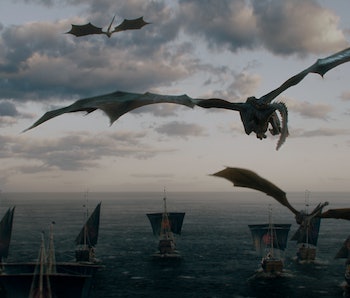 Fall will be here before we know it, and with it, comes an influx of swords, dragons, vampires, and uncertain futures. And we don’t just mean the American presidential election; there are a bunch of cool new fantasy books coming out, too. From a new entry in Scott Lynch’s Gentleman Bastards series to debuts from fresh authors, here are the fantasy titles worth watching once the leaves begin to turn.

Bringing back vampires — who have been hibernating in the coffin ever since the early 2000s gave us a case of vampire fatigue — and mixing it with Aztec mythology, all set in Mexico City? Sign us up for this one. Plus, not to judge books by their covers, but you know we all do it. This one is gorgeous. Release date: October 25.

The Queen of Blood by Sarah Beth Durst

Unlikely partners, tree mythology, a magical school, and a heroine who is neither incredulously perfect nor abrasive — all from fantasy veteran Sarah Beth Durst. Release date: September 20.

The Thorn of Emberlain by Scott Lynch

Scott Lynch’s Gentleman Bastards series is not to be missed. If you’re fascinated by Braavos in Game of Thrones and wish you could spend more time there and also with thieves instead of Faceless Men, this series is for you. The fourth volume comes out September 22.

Neal Shusterman’s Unwind was the best thing to come out of the YA dystopia boom. If you haven’t read it, drop everything and fix that now. He’s got a new series that has already been optioned for a movie. Count us in. Release date: November 22.

The Burning Isle by Will Panzo

This debut novel features pirates and magic and mysterious jungles. Did we mention magic and pirates? If that wasn’t an immediate win, it’s also set in a city that sounds China Miéville-esque. Release date: October 4th.

The Apothecary’s Curse by Barbara Bennett

Gorgeous cover aside, most fantasy limits its frontier to the western world, but this time-jumping story is set in Japan. Release date: October 25th.

Once Broken Faith by Seanan McGuire

Vassa in the Night by Sarah Porter

A cover that evokes The Night Circus and a whimsical Russian fairy tale set in Brookyn. Sign us up. Release date: September 20th.

If you like modern gritty urban fantasy but you also like dragons — which are typically found in pseudo-medieval fantasy — now you no longer have to chose, because James Bennett is tying the two together. Release date: September 6th.

The Winds of Winter by George R.R. Martin

Just kidding on that last one. It’s never coming.