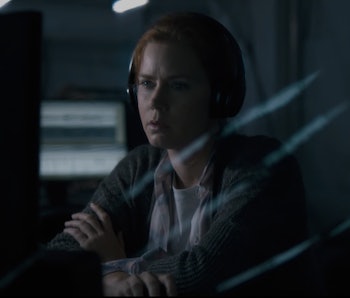 Language is at the heart of the new trailer for Denis Villeneuve’s brainy sci-fi spectacle Arrival, based on Ted Chiang’s short story, Story of Your Life. Amy Adams plays an academic tasked with figuring out how to communicate with an alien species. It’s not an easy job: “We’re never going to be able to speak their words,” Adams’s Dr. Louise Banks says in the trailer.

Do they come in peace, or are they here to enslave us lowly humans? Even worse, are they here just to mess with us and make our civilization implode on itself? That seems to be what’s at work with Adams’s linguist telling Forest Whitaker’s military colonel, “We need to make sure that they understand the difference between a weapon and a tool,” and that “Language is messy and sometimes one can be both.”

It turns out Chiang’s source material is heavy on linguistic philosophy that would make even Noam Chomsky blush, and it will be fascinating to see how Villeneuve and his collaborators translate that into a digestible plot.

Per an exceprt from Tor from Chiang’s story, here’s how the aliens communicate:

“A ‘sentence’ seemed to be whatever number of semagrams a heptapod wanted to join together; the only difference between a sentence and a paragraph, or a page, was size.

When a Heptapod B sentence grew fairly sizable, its visual impact was remarkable. If I wasn’t trying to decipher it, the writing looked like fanciful praying mantids drawn in a cursive style, all clinging to each other to form an Escheresque lattice, each slightly different in its stance. And the biggest sentences had an effect similar to that of psychedelic posters: sometimes eye-watering, sometimes hypnotic.

The heptapods didn’t write a sentence one semagram at a time; they built it out of strokes irrespective of individual semagrams. I had seen a similarly high degree of integration before in calligraphic designs, particularly those employing the Arabic alphabet. But those designs had required careful planning by expert calligraphers. No one could lay out such an intricate design at the speed needed for holding a conversation. At least, no human could.

Here’s how Villeneuve uses visuals to convey the aliens’s form of communication:

The aliens send Banks this nifty little pictograph that she has to decipher.

Luckily she has a handy tablet programmed with keywords, linguistic matches, and, probably, her Gmail account just in case she needs to check that.

It’s obvious that Banks has a tough time figuring out what this symbol means or whether it’s just some kind of stain from an alien coffee mug.

It’s all about patterns, and the symbol ends up potentially being an entire statement.

But how does she end up putting all the words together if the alien language doesn’t match with any human language.

She even checked with a bunch of people from around the world just to make sure. “How do we clarify their intentions?” Whitaker’s character asks. “I go back in,” she responds.

Does the linguist save the day? Find out when Arrival hits theaters on November 11.

More like this
Entertainment
6.29.2022 10:30 AM
25 years ago, Nic Cage made his most explosive sci-fi movie ever — it was almost even better
By Jake Kleinman
Culture
6.28.2022 9:00 AM
8 sensational sci-fi shows and movies coming to HBO Max in July 2022
By Robin Bea
Culture
6.25.2022 10:30 AM
You need to watch the most inventive Bruce Willis time-travel movie before it leaves Netflix this week
By Eric Francisco
Related Tags
Share: