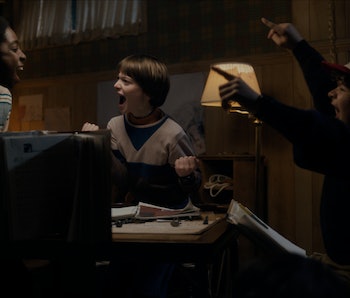 To fully understand Netflix’s supernatural thriller hit Stranger Things, you have to be fluent in Dungeons & Dragons. The influential fantasy role-playing game published by game-makers Wizards of the Coast factors heavily in both the show’s mythology and the worldview of its nerdy pre-teen protagonists.

But does the show get the game right? Inverse spoke with Mike Mearls and Greg Tito, the head of D&D development and communications manager at Wizards of the Coast, respectively, to get the inside word on how the company views the show.

Mike Mearls: There’s the story side and the game design side. We have a staff of writers and artists, and that group creates the annual stories that we feature, and I manage that process. A lot of it is more strategic thinking of how a story will fit across products, but it’s also providing a higher level guidance on where and how stories develop. If someone pitches a story I might say, “How will this story resonate with someone who doesn’t know D&D? What movies and touchstones would you compare this story to?”

It’s like if you’re recommending Stranger Things, you’d immediately say, “Oh it’s got a 1980s John Carpenter vibe.” We always want to make sure D&D is resonating beyond D&D fans. The game design is focused mostly on people who already play and steeped in D&D lore.

So is it important to constantly try to pull from different movies and influences?

MM: Definitely with a modern audience it’s important to relate to movies and things like that. When creating new titles it’s a matter of finding ways to relate it in that way you can easily describe it as, “Imagine if the guys from Lord of the Rings had to deal with the alien from Alien.” Hopefully they think that’s cool and gets them to want to play. What you don’t want is that impenetrable thing where you’re reading a comic and you have no idea what’s going on because it’s based on an obscure story arc from five years ago. It’s easy for games to get difficult because they’re so deep in their own culture, but you always wants to keep it open to general pop culture.

Do you think the perception of it as a nerdy game has changed over the years?

MM: When you think of “nerdy” in terms being really into a universe, pop culture has re-calibrated so it isn’t something that turns people off anymore. If you think back to high school there was a peking order with an elite group at the top who were predicated upon exclusivity. But nerd culture says the more the merrier, it’s about openness. If everyone in school is a nerd then that’s great because we have more people to play. The problem that nerd culture runs into now is that it starts to turn in on itself and starts to look like that elite kind of thing.

One of the general trends we’ve seen emerge in pop culture is people want to be part of things and don’t typically worry about what’s nerdy anymore. People are much more comfortable now wearing a Captain America shirt and going to a comic book movie, which would have been ridiculed in the 1980s.

Greg Tito: We also hear more and more from parents, educators, and mental health professionals who encourage Dungeons & Dragons because it’s not screen-time. The game’s about social interaction that builds certain skills like teamwork. Kids get an experience that they want to play and they get to tell stories and come up with amazing ideas. It doesn’t feel like learning or the normal things schools would shove down your throat. It’s gone full circle from a thing that was even demonized to something that’s now lionized.

Are you surprised that it’s been seen as a touchstone for a certain set of genre filmmakers?

GT: The prevalence of intelligent creators in that community who play Dungeons & Dragons is astounding. I was surprised to notice when talking to people in Hollywood about D&D that there are that many different games going on. Plus you see it on-screen a lot, and not just Stranger Things. It’s Freaks and Geeks, The Goldbergs, and even on Empire there was a D&D reference. We found out there’s a writer on that show that plays in a group with John August who wrote Big Fish and Craig Mazin who wrote the Hangover sequels. It’s interesting to make the connections to how references get in certain places. It’s everywhere.

What do you think of the depiction of the game on Stranger Things specifically?

MM: The important part of the show is how it embraced D&D. It’s not just a reference to it like on Big Bang Theory or something. It was very much integral to the plot but also important to the characters.

The best part was seeing how the game changed not only how they viewed the threat of the creature, but how they viewed their relationship as friends. Nothing had really captured that kind of thing before. The characters were a real gaming group because of how you saw them react to the threat. Lucas wants to fight it, so he’s the power gamer. Dustin is all about keeping the group together, so he’s the glue. And Mike’s the Dungeon Master, so he’s the ringleader and the creative one who sees the bigger picture to figures stuff out. Even when Will is being chased by the creature he did a very D&D thing of not panicking, not going and hiding under the bed — he’s a D&D player who knows he can kill monsters.

What’s the reaction to Stranger Things been like internally at Wizards of the Coast?

MM: It’s exciting because at first it was, “Hey there’s this show about Dungeons & Dragons you should watch,” because it wasn’t really on my radar until there were articles pointing out its use of D&D. I first sat down and said I’d watch two episodes and go to bed, then at the end of episode six I knew I was going to be dead tired the next day at work.