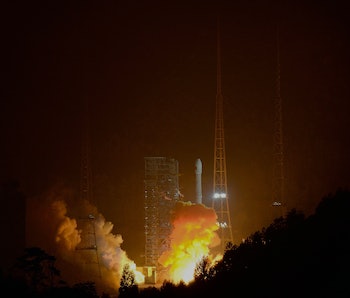 Chinese space officials are preparing to launch the world’s first quantum communications satellite into Earth’s orbit in just a matter of days, state media reported on Monday. The launch, to take place in the middle of the Gobi Desert from within Mongolia, would propel Beijing’s space exploration operations several steps ahead, as well as put the world’s most populous country in an envious position to begin unrolling hacker-proof communications systems.

The satellite’s launch would be the culmination of a five-year, multi-billion dollar project part of a larger effort to surpass the west as a science and technology powerhouse — something China has struggled mightily with for years, but a goal that is now within arm’s reach.

“There’s been a race to produce a quantum satellite, and it is very likely that China is going to win that race,” Nicolas Gisin, a quantum physicist at the University of Geneva, told The Wall Street Journal. “It shows again China’s ability to commit to large and ambitious projects and to realize them.”

A quantum satellite essentially exploits properties exclusive to the behavior of subatomic particles, and harnesses them to provide augmented capabilities. In the case of a quantum communications satellite, such a technology would use “quantum encryption” to provide enhanced security to a system, since a quantum particle that encodes information would be destroyed as soon information is measured and transmitted. A hacker that tries to intercept the message would effectively destroy that same message.

Of course, quantum encryption is not air-tight — a hacker could still break into the system by using a laser against the quantum receptor in the hardware. However, that’s much easier said than done. The 1,400-pound satellite, if successful, would be a shining example of quantum engineering, as well as a milestone in cybersecurity and safeguarding against digital espionage.