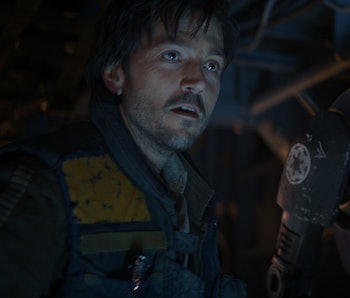 Swimming wasn’t the only major attraction during NBC’s Thursday night telecast of the Olympic Games: Lucasfilm also treated the audience to the first full trailer for the Star Wars movie, Rogue One. A short teaser for Gareth Edwards’s film, released in April, was enough to whet the appetites of fans eager for the franchise’s first stand-alone film; and the reaction was fairly positive. Then came news that Lucasfilm and Disney brass were worried about the movie because it was supposedly more serious than the morning serial throwback spirit of its predecessors.

Reports of those reshoots vary — every movie of this size inevitably goes back for a few. But did the new trailer live up the excitement of the teaser, or did it present a newly tinkered-with Rogue One?

We don’t know exactly what transpired during the reshoots, but there are enough solid rumors for a few educated guesses.

The reshoots kerfuffle was allegedly about Edwards delivering the studio a serious war picture, which wasn’t exactly what Disney and Lucasfilm were expecting. According to these rumors, the studio tried to reposition the standalone movie into a lighthearted Ocean’s 11-esque caper. The new trailer says otherwise.

It’s obvious that Edwards and company kept the sci-fi motifs of the Star Wars universe and did nothing to change the war movie tone that was supposedly the big, scary problem. The teaser featured a lot of explosions, but the official trailer added in some X-Wing action, Baze wielding a heavy cannon and a rocket launcher to take down an AT-ACT, and even what looks to be the Empire testing the firepower of its battle station on the new planet of Jedha. If this war movie tone seems like a problem, then you need to get your head checked.

Something that the teaser overlooked was giving us a sense of the team that Jyn (Felicity Jones) puts together – beyond glimpses at them looking totally badass. It’s a lot to ask for in a two-minute clip, but the trailer did an adequate job of giving everyone their due. From Cassian’s “I’ve been recruiting for the rebellion for a long time” line, to Baze giving us his backstory by saying, “They destroyed our home,” to the monk-like Chirrut’s declaration of, “I fear nothing. All is as the Force wills it,” they delivered on explaining what motivates this rag-tag bunch. Chalk it up to Riz Ahmed’s subtle performance in the millisecond he’s on-screen, but Bodhi’s apprehension with the mission is clear in just one anxious look.

The trailer even ends on a shot of the team, so putting them at the heart of the story while making it clear that Jyn is the primary focus was a definite upgrade.

What used to be an angry looking Forest Whitaker in the teaser becomes a bit more clear in the official trailer. It looks like he had time to grow his hair out too. Granted, we didn’t even know Whitaker’s character actually was Saw Gerrera when the teaser came out, and it’s obvious the filmmakers were a little perplexed by him as well. Here, Whitaker plays Gerrera as a little more weary and a little more sullen after what has to be years of battle against the Empire. It’s also obvious that Jyn goes to him to seek counsel or to ask him to join in her mission. He’ll still largely remain a mystery until the lights go down and the film starts when it’s released in December, but enough is there for fans and general audiences to put the pieces of his character together beyond wondering who this cranky, vaguely robotic dude is talking to Jyn in obvious trailer-worthy soundbites.

The name “Death Star” isn’t uttered once in the trailer, and yet the entire plot hinges on it. There’s reference to a “major weapons test” left over from the teaser, while the trailer keeps the actual story of what happens in Rogue One as oblique as possible. The closest we get to context is Saw saying, “Imperial flags reign across the galaxy,” but isn’t that always the case? It doesn’t need to be obvious, just a little more definite about the fact that Rogue One is a prequel that takes place before the events of 1977’s A New Hope. We’ve spruced up the dialogue from the trailer a bit to clarify all that, so please, Lucasfilm, use any of these you want:

When word got out after Star Wars Celebration that Vader was officially in Rogue One, fans went nuts. But why? Seriously. Is it just because he hasn’t been seen on-screen since 2005’s Revenge of the Sith? It’s surely not because he has to be an important part of Rogue One. The glimpse of the Dark Lord of the Sith and his robotic breath at the tail end of the trailer was pure, unadulterated fan service. Remember, at this point in the saga, Vader was just a pawn in the Emperor’s grand scheme of things and was more like a henchman for Grand Moff Tarkin. It’d be out of place for him to suddenly be making executive decisions before inheriting that power following the events of A New Hope. Edwards obviously doesn’t want to spoil everything this soon, but there was no indication here about why Vader is in the movie in the first place.