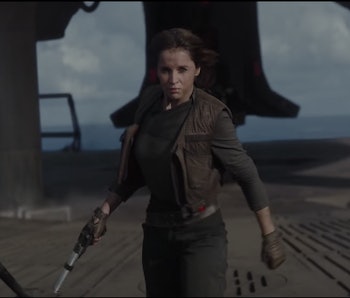 It’s been a long time coming, but the newest trailer for Rogue One is finally here.

We got new looks at the mystical planet of Jedha, characters like Bodhi Rook and Saw Gerrera, new hints at what the Empire might be up to with the Death Star, and even a look at the Dark Lord of the Sith — stay tuned, because we’re breaking down the trailer shot by shot.

After Lucasfilm didn’t release a new Rogue One trailer to the public after an attendees-only peek at the first standalone Star Wars movie (at the recent Star Wars Celebration), most fans felt left out. Sure, they had seen the official teaser that was released in April at least a thousand times already, and they were fiending for some new looks at director Gareth Edwards’s retooled sci-fi war film after a series of controversial reshoots. So when news broke that Lucasfilm would debut the movie’s first full-length trailer on a non-Disney-owned network during primetime hours of Rio Olympics coverage, Star Wars fans tuned in and waited. Then they waited. Then they waited some more. After a few more gold medals for Michael Phelps and Simone Biles, the trailer finally debuted:

Here’s what caught our eye in those glorious two minutes and 15 seconds.

Here’s a gorgeous shot of what looks to be a Mos Eisley-esque outpost on Jedha. It could be a wretched hive of scum and villainy, but more importantly it’s probably where the Empire organizes their plan to mine for Kyber Crystals to help power the Death Star.

Then we got an updated look at Forest Whitaker’s extremist Rebel insurgent, Saw Gerrera. In the first trailer he was bald, but now he’s distinctively more grey. “The world is coming undone. Imperial flags reign across the galaxy,” he tells Jyn Erso. “This is our chance to make a real difference,” she tells him later in the trailer, meaning this meeting most definitely happens after she gets her mission. Does she try to enlist his help and he rejects her offer?

This Star Destroyer is getting up close and personal to the butte-like Jedha village. Two people — probably Cassian and Jyn — can be seen at the bottom of the frame. Perhaps they’re trying to hitch a ride to the Empire’s military installation on Scarif.

A nice little moment between two Rebels. The trailer makes Jyn and Cassian out to be equals, like a Star Wars version of Mad Max and Furiosa. “If you’re really doing this, I want to help,” Cassian tells her. Later he admits, “I’ve been recruiting for the Rebellion for a long time.”

Jyn and Cassian take off in their U-Wing allowing us a nice look at the craggy landscape of Jedha, which resembles Tattooine.

Then we get two peeks at a nighttime battle in the rain, with the Rebelllion using a full force X-Wing attack and ground troops that include Jiang Wen’s Baze Malbus. We’re figuring this battle also takes place on Jedha, given the similar rock formations to the U-Wing scene above.

If you didn’t know already, Baze is a weapons expert. Single handedly taking down an Imperial walker without an X-Wing fighter or a Snowspeeder is something only Luke Skywalker has done on-screen.

The trailer also gives us our best look at the reprogrammed Imperial security droid K-2S0 (played with a C-3PO-like British accent by Alan Tudyk). “The captain says you are a friend,” Kay-Tuesso says to Jyn as they walk the streets of the Jedha village, “I will not kill you.”

We also get another view of Donnie Yen’s blind Force-loving monk Chirrut Îmwe. At some point, Cassian and Jyn seem to get captured or stopped by a squad of Stormtroopers on Jedha and Chirrut uses his quarterstaff and fighting skills to free them.

Welcome Riz Ahmed’s anxious Imperial defector Bodhi Rook to the Star Wars saga, not-quite egged on by Tuesso saying, “There is a 97.6 percent chance of failure” in their mission.

Probably the best shot in the entire trailer, it shows what is presumably a fully armed and operational Death Star cruising into Jedha’s atmosphere. Why would it be on the move like that? Well…

Maybe a volatile Orson Krennic, Director of Advanced Weapons Research for the Imperial Military and minion of the even more volatile Emperor, caught wind of Jyn and the Rebellion’s mission and personally sought to put an end to it.

This is the most perplexing series of shots in the whole trailer. It’s obvious that the Death Star makes it out of this movie in one piece just so Luke can blow it up in A New Hope, so is this Cassian and Jyn escaping Jedha and jumping into hyperspace just as the planet is being destroyed by the Death Star on Krennic’s orders?

While there were plenty of shots of the tropical planet Scarif — the “primary construction facility for the vast Imperial war machine” — leftover from the previous trailer, the ocean horizon of this shot seems to indicate this is a new one. And what a total badass hero shot of Jyn it is. But what’s she doing confronting a TIE fighter by herself?

And there he is, Darth dad himself. The rumors of his involvement in Rogue One were not greatly exaggerated as the trailer ends with Vader’s iconic breathing while looking at some kind of navigational map. Does Vader join up with Krennic to try and crush the Rebel mission himself?

We’ll have to just keep watching the trailer over and over again until Rogue One hits theaters on December 16.