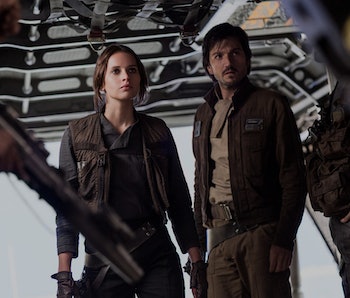 With Disney and Lucasfilm set to finally drop the newest Rogue One trailer during primetime at the Olympics, fans will learn a whole lot more about what filmmaker Gareth Edwards’s standalone Star Wars movie will be all about. Appropriately enough, the once desolate Rogue One page on the Star Wars Databank — aka the official descriptions of everything in the saga’s canon — was just updated with new details for fans to pick apart before feasting their eyes on the highly anticipated trailer.

While most particulars about characters, new planets, and vehicles were old news to anybody keeping up with the announcements, certain parts of the new descriptions give away just enough plot details to infer what will go down when Rogue One hits theaters on December 16.

First, check out the new official synopsis for the movie before we pick out the best of what’s new:

“From Lucasfilm comes the first of the Star Wars standalone films, “Rogue One: A Star Wars Story,” an all-new epic adventure. In a time of conflict, a group of unlikely heroes band together on a mission to steal the plans to the Death Star, the Empire’s ultimate weapon of destruction. This key event in the Star Wars timeline brings together ordinary people who choose to do extraordinary things, and in doing so, become part of something greater than themselves.”

“Gerrera is bunkered on the ancient world of Jedha, coordinating a prolonged insurgency against the Imperial occupation.”

This means that the recent EW profile about Rogue One’s new planet – “noting, Within Jedha, even though there’s the oppressive foot of the Empire hanging over them, there’s a resistance that won’t give up and our characters have to go and meet people there to try and secure a person from this group,” – was most definitely referring to Forest Whitaker’s character and his band of Rebel extremists.

“A cruel but brilliant man, Krennic has staked his reputation on the delivery of the functional battle station to the Emperor.”

We knew this already, but this is the first solid mention of the Emperor in regards to the plot of Rogue One. Will we get a glimpse of old Palpatine when Ben Mendelsohn’s character goes to visit him?

“A small desert moon frosted by a permanent winter, Jedha is home to one of the first civilizations to explore the nature of the Force. At one time a world important to the Jedi Order, Jedha serves as a holy site for pilgrims from across the galaxy who seek spiritual guidance. Now, the Empire occupies Jedha, and a prolonged battle between Imperial forces and scattered Rebels carries on in the timeworn streets.”

It’s now obvious a lot of the movie will take place on Jedha. The “permanent winter” part is a new tidbit. If that’s true, then why does it look like a desert planet? Maybe the Empire changed the atmosphere by mining for Kyber crystals to use in the Death Star.

“Ever practical, but highly anxious, Bodhi must gather his courage to bring the battle to the Empire.”

Does this mean Riz Amhed’s “highly anxious” Empire defector character might betray the Rebellion or jeopardize their mission?

“The pragmatic droid is an effective insertion agent, as he can blend in perfectly at Imperial installations and outposts.”

This means Alan Tudyk’s performance capture droid — awkwardly spelled out as “Kay-Tuesso” — might be the key for Jyn Erso and her crew to get behind enemy lines.

“A larger version of the standard combat AT-AT, the AT-ACT walker features a dedicated cargo bed for the transportation of heavy building materials or combat munitions. It was deployed at major Imperial construction projects, such as shipyards and sprawling research installations.”

Wow, the AT-ACT is actually bigger than an AT-AT.

“The planet Scarif would be a beautiful tropical paradise if not for the presence of a major Imperial military installation. Scarif is the principal construction facility for the vast Imperial war machine. The world is enveloped in impenetrable deflector shields and is heavily defended.”

Now, at least, we know where the Death Star construction site is.

“A sturdy troop transport and gunship used by the Rebel Alliance, the U-wing starfighter is a well-armed swing-wing vessel that must penetrate heavy fire zones to deposit soldiers onto battlefields and then fly air support during dangerous missions against the Empire.”

Expect the Rebels to be dropped into Scarif on one of these bad boys, which was probably the ship Jyn was on at the end of the Star Wars Celebration reel.

“Specialist stormtroopers stationed at the top secret Imperial military headquarters on Scarif, Shoretroopers patrol the beaches and bunkers of the planetary facility.”

These baddies will try to repel the Rebel offensive on Scarif’s beaches to steal the Death Star plans. Stranger still, there’s no mention of Deathtroopers in the Databank.

And that’s just the new info. Check out the official descriptions of Jyn Erso, Cassian Andor, Chirrut Imwe, and more over at StarWars.com.