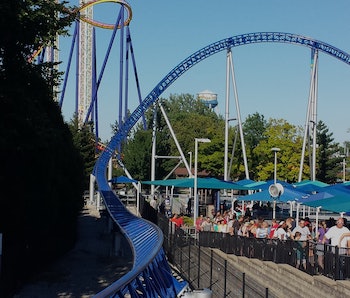 Last month, Pokémon Go stole the technology world’s augmented-reality thunder when it promptly took over. But iconic rollercoaster theme park Cedar Point in Sandusky, Ohio had launched its own augmented reality experience shortly before. Now that the Pokémon Go commotion has quieted down, it’s time to pay closer attention to other important AR expansions, like the one at Cedar Point, as world-wide exploration continues at the intersection of entertainment and technology.

Called “The Battle for Cedar Point,” the new augmented reality experience is an engaging and competitive way for Cedar Point guests to enhance their theme park experience with the free mobile Cedar Point app. The app prompts guests to align themselves with one of five rollercoaster clans — Valravn, Gatekeeper, Millennium Force, Maverick, and Top Thrill Dragster — named after Cedar Point coasters, and then compete against members from other clans throughout the day. You earn points by scanning ride signs, t-shirts, and other symbols throughout the park, which come to life with animated signs and characters on Android or Apple devices once activated by the app.

Christian Dieckmann, the VP of Strategic Growth for Cedar Fair’s 11 theme parks in North America, says that the AR experience taps into the fandom that’s sprouted around many of the park’s roller coasters. Cedar Fair has 10 other theme parks to adorn with technological flourishes in the future.

The goal of these tech initiatives is to identify ways it’s used to add value to the guest experience, and throwing a little competition into the mix has been a crucial part of its success.

While the “Battle for Cedar Point” uses a geolocation-based AR component like the game Pokémon Go, it goes beyond just using the camera function of the phone to overlay digital imagery. “The digital imagery in our app is based off physical triggers that the phone scans and usually it’ll mock and animate a sequence that is consistent with the actual environment,” Dieckmann says. One of the “hero moments” of the Battle for Cedar Point takes place at Valravn, where an animated raven will swoop out of the sky and perch on a throne (where guests often pose for pictures).

The “techtainment” team, as Dieckmann calls it, will next develop other technology-based experiences at their other ten parks around the world. Some of these plans have already been executed, while others, like the partnership with Electronic Arts for a virtual reality ride at California’s Great America modeled after the Mass Effect video game series, are still in the works.