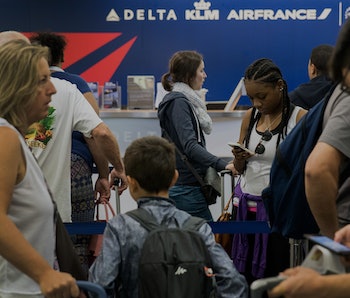 Delta Air Lines continues to cancel flights after thousands of people were stranded this week due to an electrical problem at the company’s Atlanta headquarters. Many people remain grounded as the airline struggles to find the pilots, flight attendants, and other workers needed to get its planes in the air.

Delta blamed the problem on an electrical outage in Georgia Power’s network, but a spokesperson for the power company denied those accusations, saying that there was no power outage and that the fault lies with equipment on Delta’s system.

While most long-term delays are caused by extreme weather like a winter storm, they’re also often the result of computer glitches and technical errors like this one was.

Which makes it baffling that airlines don’t have backups for critical systems. It’s easy to see what happens when they don’t: A rash of flights are canceled right away, then many others are canceled or delayed because there are rules about how many hours a pilot can work before they have to take a break. It’s a domino effect of airline customers getting screwed over because of an IT problem.

Delta says it is “moving towards normalcy” with only about 25 flights canceled Thursday. (Some due to bad weather, others because of this issue.) But that might be part of the problem — “normalcy,” in this instance, means dependence on a system that was just proven to be incredibly fragile.

Planes don’t have a single point of failure. That would be absurd. Now’s the time for Delta and other airlines to learn that the systems powering their flights, which many thousands of people rely on to get around the world, shouldn’t be so easily broken.