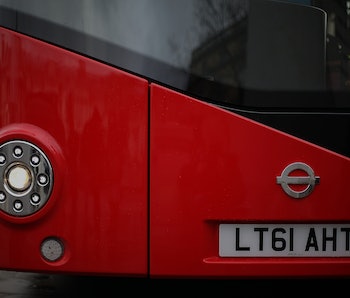 London’s iconic red buses are going to display real-time traffic updates on the back windows, Transport for London (TfL) announced on Wednesday, an idea the authority claims is a world first. When driving behind a bus, road users will get notified of crucial information, like to avoid going west or watch out for construction work.

The technology combines a display hooked up to a GPS tracker that pulls data from TfL’s central servers. The system is starting a trial run on route 344, between Clapham Junction and Liverpool Street, for the next six months. After that, route 415 between Tulse Hill and Liverpool Street will try out the idea for a further six months, after which TfL will assess and decide whether to expand the idea across the city.

London’s transport authority has a history of experimenting with new technology. In June, TfL was the first in the world to roll out a new direct message feature on Twitter that would alert commuters when their favorite tube lines were experiencing delays. In July, TfL announced it was taking the city’s contactless payment system to metro stations around the world.

“This innovative use of one of the Capital’s most iconic features the London bus will help all road users,” Garrett Emmerson, TfL chief operating officer for surface transport, said in a statement. “We’re focused on keeping London moving and on giving drivers real-time information through a range of channels to help them avoid congested roads and reduce wasted time and needless pollution from idling cars.”

The body runs a number of hackathons aimed at getting developers like Citymapper to create new apps, using publicly-available transport data in new and innovative ways. Buses will use the same data that is available to app makers to display traffic info.

TfL tried something similar last year, using the displays on top of taxis to provide traffic updates. The trial was a success and expanded citywide. TfL’s new bus system expands on this idea.

The signs are being provided by Equitech IT Solutions. “We are delighted to be partnering with TfL to trial this new technology,” said Craig Holloway, chief executive of Equitech IT Solutions, in TfL’s statement. “We know how beneficial having real-time traffic information can be for road users, and the technology we have developed will hopefully make life for Londoners easier by having up-to-date information provided to them when travelling on the Capital’s roads.”

More like this
Innovation
Sep. 22, 2022
Trash can-sized robots could revolutionize how you travel — but there's a catch
By Molly Glick
Innovation
7 hours ago
This is how scientists will predict the next massive hurricane
By Abe Musselman
Innovation
Oct. 5, 2022
Worm spit could be a secret cure to the world's plastic problem
By Molly Glick
Related Tags
Share: