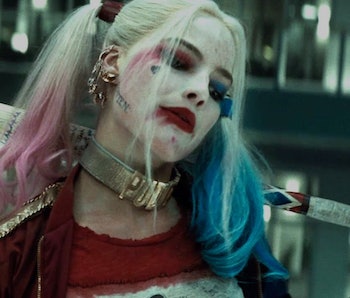 As a part of the DC cinematic universe, there were so many Easter eggs in David Ayer’s Suicide Squad that one viewing isn’t enough to catch them all. While seeing the film again, I saw a huge Easter egg that made me royally pissed I had missed it the first time: On Harley Quinn’s (Margot Robbie) rap sheet, the psychopathic girlfriend of the Joker is revealed as having murdered Robin, Batman’s sidekick.

In my defense, those half-second rap sheets came and went in the blink of an eye, and the neon colors that accompany Harley’s visions made it especially hard to read. It was barely legible, which I guess make it a prime spot to hide something as major as Robin’s death. But how did that happen, and why is Robin’s murder being tucked away in Suicide Squad in the first place?

It is beyond weird that Robin’s death is an off-screen backstory in DC’s movie universe. Instead of making it mean something, it is now just exposition or DC movie history removed from any kind of context. Robin’s death was yet another unexplained Easter egg in Batman v Superman with Ben Affleck’s Bruce looking mournfully at Robin’s vandalized costume in the Batcave.

Imagine how much more loved these DC movies would be if audiences gave a shit about its characters like Robin, only to witness his brutal murder by Harley. Imagine how devastated the internet would be, having fallen in love with Harley and seeing her make a horrible choice. Instead, we’re apathetic to this universe. We don’t even know which of the Robins died, although in all likelihood, it was Jason Todd.

A Death in the Family

The only Robin to have died in main canon, Jason Todd is the second Robin to Batman following Dick Grayson’s maturation into Nightwing. Introduced in 1983, the 1985 reboot Crisis on Infinite Earths retooled Jason Todd into an unlikeable dingbat to the point DC contemplated killing him off.

“They did hate him,” recalled former DC editor Dennis O’Neil in the book The Many Lives of the Batman. “[M]aybe they saw him as usurping Dick Grayson’s position. Some of the mail response indicated that this was at least on some people’s minds.”

Inspired by a Saturday Night Live sketch involving Eddie Murphy, a live lobster, and a vote-in telephone number, DC asked readers to vote whether or not Jason Todd survives the cliff-hanger ending in Batman #427 written by Jim Starlin. In it, the Joker sets up an elaborate trap for the dynamic duo and corners Jason, severely beating him with a crowbar, something that’s since become an icon in the mythos. A dying Jason protects his mother from a time bomb, but goes off before Batman can rescue them in time.

Naturally, Jason wouldn’t be left out for long. The character would soon be resurrected as the anti-hero vigilante, the Red Hood, the former persona of the Joker before his hysterical transformation.

Departing from the comics is that Harley Quinn is the killer of Jason Todd, if it is Jason Todd at all. (I get the sense the DC filmmakers want to hold off identifying Robin so these movies don’t have to be rigidly tied to certain characters and stories). Harley wasn’t introduced until Batman: The Animated Series in 1992, only making her comic book debut several years after the fact.

None of these movies ever accurately adapt the source material, nor should they need to. But what does it mean that Harley and not Joker, the sworn nemesis of Batman, is the one who offed Robin? It does nothing significant to Harley as a character, especially since Robin is a mere ghost spoken in whispers in this universe. If killing Robin was supposed to predispose us to disliking Harley – to sell the idea that everyone in Suicide Squad are villains we shouldn’t root for – then how come we’ve never met Robin in the first place?

There’s some room to speculate that Harley’s ceaseless service to the Joker means she could have been following orders. Maybe Joker is still the killer of Robin, it’s just Harley who did the deed. It’s unlikely we’ll ever truly know. Not because mysteries aren’t always meant to be solved, but because these movies are so failing to build a universe we might not care at all.