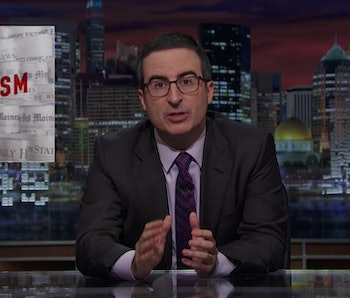 John Oliver wants you to know there’s more to journalism than raccoons that look like cats. Despite Oliver’s protestations, he has been described several times as a journalist by the media, but on Last Week Tonight Sunday evening, Oliver emphasized the important work of real journalists.

Oliver is no stranger to the crucial revelations uncovered by local print media. Last Week Tonight cited the work of Harry Esteve, a reporter at The Oregonian, in a popular episode about the Oregon Lottery. Esteve uncovered ways the lottery was taking money from problem gamblers, despite the organization’s cheery brand image of only doing “good things.” Without Esteve, the story may never have reached national media, which operates on a “chain” that so often begins with local print news.

Spotlight, a powerful film about the Boston Globe’s role in exposing child abuse, won an Academy Award for Best Picture in 2016. “One of the things that made Spotlight so powerful is the knowledge that the newspaper industry is in big trouble,” Oliver said.

Pew Research Center figures showed that from 2003 to 2014, the number of full time state house reporters declined by 35 percent. In a clip played on the show, David Simon, creator of HBO show The Wire and a former Baltimore Sun reporter, highlighted the role local print journalism plays in exposing corruption.

“The day I run into a Huffington Post reporter at a Baltimore zoning hearing is the day I will be confident we’ve actually reached some sort of equilibrium,” said Simon. “The next 10 to 15 years are going to be a halcyon era for state and local political corruption. It’s going to be one of the great times to be a corrupt politician. I really envy them, I really do.”

The shift to online media has failed to offset a decline in print revenue: in the 2004-2014 period, Pew Research Center found that newspapers gained $2 billion in online ad revenue, but lost $30 billion in print revenue over the same period. One outlet hit hard by the contraction was The Oregonian, which was forced to make layoffs that included Esteve.

The response from some in the industry has been troubling. Sam Zell, who formerly held a controlling share in the Tribune Company, was seen in a video clip outlining to a journalist at the Tribune-owned Orlando Sentinel his priorities for output. It ended with Zell saying “fuck you.”

More like this
Gaming
6.23.2022 12:30 PM
Known gamer Ted Cruz would love these 6 pay-to-win games
By Willa Rowe
Entertainment
13 hours ago
10 years ago, the most misguided Spider-Man movie almost killed the franchise (again)
By Felipe Rodriguez Torres
Entertainment
4 hours ago
Everything you need to know about Kevin Smith’s totally epic Clerks 3
By Eric Francisco
Related Tags
Share: