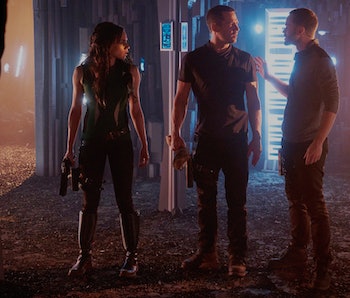 Last week on Killjoys, we boarded an asteroid ship to find some green goop, do battle with some killer robots androids, see D’av have a Hogwarts Moment, and hear Dutch sing one hell of a siren song.

Still in search of some answers about the green stuff that makes Level 6s all Level 6-y, D’av, Dutch and Johnny discover that D’av has some kind of special connection with the aforementioned goop when D’av connects with Mossy (Johnny’s pet name for the mossipede they picked up in the mine a few episodes ago). Turns out that D’av can make Mossy dance — as in, he’s got telekinetic-adjacent powers when it comes to the green stuff.

Looking for another source of green plasma, the gang turns to everyone’s favorite Warlord for some help. Pree points them towards San Romwell (Keon Alexander), a notoriously slippery trader with a collection of the galaxy’s coolest shit and 300 outstanding warrants.

Turns out the guy has an asteroid spaceship because this is Killjoys and of course he does. It gets the Johnny Jaqobis Stamp of Approval for Awesomeness and the gang boards to find that Romwell has the next-level, Killjoys version of a Replicator: a molecular printer and an assload of keys to print up everything from tiny vials to giant spiders on demand.

Romwell has the plasma they’re looking for, but the rub is that he’s kind of a huge tool when it comes to trading and more-or-less tricks the killjoys into capture, then demands that Dutch trade her royal instrument for their freedom. He also wants the story behind it. And a song. Courtesy of a mind meld, Romwell sees an entire happy, domestic life with Dutch in the course of the song and gets a bit lost in it as he plays the instrument and she sings.

Which turns out be a mistake because the strings are coated in a paralytic agent to which Dutch is immune and once Romwell’s thoroughly incapacitated, she kills him with one of the strings. Oops! Dutch heads to the molecular printer to get their plasma and get the hell out of the rock(et)ship. She would’ve gotten away with it, too, if it hadn’t been for some meddling nanites that essentially make Romwell a 400+ year-old mostly unkillable nightmare jerkface. Romwell comes back to life and fights Dutch before they end up sort of bargaining now that Romwell has an accidental crush on Dutch.

Meanwhile, Dutch and D’av are dealing with Romwell’s droids and getting their asses kicked before Johnny syncs Lucy with the system and hacks one of them, resulting in a not-quite-fully-featured app version of Lucy in an android body. Which is a little weird, but gets a lot weird when she kind of insists on making out with Johnny…for science. Things go from weird to worse in Android World when Romwell’s droids go from asshole mode to kill mode and Johnny and D’av require some bailing out.

The team needs Romwell’s help to call off the droids, he puts a condition on his help: He wants Dutch to fulfill his song-driven domestic fantasy, to stay with him, to “make him a better man.”

Dutch is having none of it, of course. In my favorite line of the episode and maybe in all of Killjoys, she turns on him and says, “Not my job. You do this because it’s right or stay out of my way. I’m not your manic pixie assassin.”

Dutch! How do I love thee? Let me count the ways. The casual, nonchalant, pitch-perfect feminism of Killjoys strikes again and it’s a thing of beauty. Dutch unapologetically crushing ancient fuckboi dreams is the perfect thing we didn’t know we needed.

Following that delicious turn of events, D’av fashions a grenade out of crystal and goo, uses some pretty nifty telekinesis, and flashes the dorkiest grin I’ve ever seen in my life as he says, “I’m a wizard,” and the team flies/blasts out of the asteroid spaceship.

Post-escape, we get a moment of earnest D’av as he reveals that being able to control the green stuff in a way that might help them take on the formidable Level 6s is the best he’s felt about himself in a long time.

Unwinding after a crazy mission, Johnny and HoloPawter “catch up,” Dutch and Alvis do some talking about Scarback green tree sap (folks, turns out their whole order might’ve misunderstood the intent of the whole slicing-your-skin-open thing) and then do some not-talking, too. D’av then returns to Old Town with some peaches for our new favorite bartender, Sabine, and they do a little bit more than eat peaches, which, um, kinda sorta ends with Sabine naked on the floor and bleeding green goo. So that’s not great.

But for 85% of the episode, we were treated to more of this season’s D’av — the goofy, smiley version, who’s so much more fun than Broody!D’av.

We’re definitely going to have some fallout to deal with next episode, but “I Love Lucy” was a damn fun ride, full of all kinds of gadgets and cool space stuff. An asteroid ship! A giant spider! A killer song! It was an instant classic of a Killjoys episode that floored it and had us excited to see what it bizarre, gleeful oddity was waiting around every corner. That’s why we keep tuning in: it’s a fun, it’s fast and there are asteroid spaceships. Asteroid spaceships!