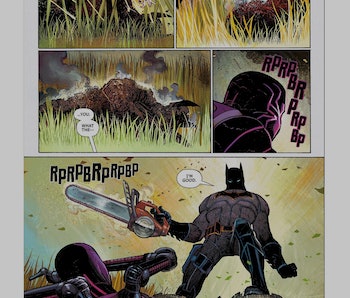 Batman’s best comics tend to lean more toward horror – so it’s lucky for fans that DC has just released All-Star Batman, a dark road-trip story in the American midwest.

The superhero-horror comic, created by beloved DC heavyweights Scott Snyder and John Romita Jr., is the freshest and scariest Batman story since 1988’s The Cult. Snyder and Romita Jr. spoke with Inverse all about it.

“Once, when I was in Iowa for the first time in my life,” Romita Jr. told us, “I walked out into the middle of a cornfield. I remember I heard nothing but my own heartbeat. I thought, if I break my ankle, there’s no one to call. That’s what Batman’s doing [in All-Star]. Outside of a city, you’re at the mercy of every small screw in your engine, because if something goes wrong, you could be stuck for days without help.”

Pushed to innovate the same character (Batman) once again, Snyder and Romita Jr. decided to take him out of Gotham and place him in alien territory. They chose an open area, a place they call “upstate,” because of their personal experiences out in the middle of nowhere.

The comic begins in the middle of the action, which Snyder tells us was a purposeful move, meant to discomfort and startle readers. Batman escapes two lesser criminals in a diner, and we later learn Two-Face has put out a nation-wide hit on him, in order to prove that desperate people are driven to, and are defined by, their lesser natures. “He’s surrounded by strangers,” Romita Jr. said, “with a gigantic target on his ass and nowhere to go.”

Batman argues with Two-Face like God and Satan in the book of Job. When asked why he chose Two-Face as his villain, Snyder said the decision came down to whom scared him the most:

“You don’t see Two-Face a lot anymore,” Snyder said, adding, “but I wasn’t going to use, say, The Joker, because he’s not a personal boogeyman for me. Two-Face scares me on a unique level. There are times when I’ve struggled with anxiety and depression, and I try to be pretty open about it. Even in regular moments, when we have selfish impulses, we don’t recognize ourselves, or we see something we don’t like and don’t want to claim. If you reconfigure Two-Face to be a character who loves that darkness, rather than someone who’s tormented by it, if he loves the darkest corners of human psychology, that’s the kind of thing that keeps me up at night.”

Snyder also says Two-Face is the most appropriate Batman villain for our current political climate. “We’re up against very scary, very serious problems that feel larger than all of us. Two-Face tells Batman, “This is my time, because deep down people are going to be revealed to be ugly, selfish creatures: as villains and not as heroes. He sees people act a certain way behind closed doors, and another way in public, and he believes that private person is the real one, and Batman says that’s not so.”

Of course, Snyder makes a controversial move in All-Star Batman’s opening, having Alfred take a shot at the Batmobile from the safety of the Batcave. “It’s played for shock, but it’s not a ‘Hail Hydra’ kind of thing. He’s the heart of the Bat family, and he did something that brought him down a dark path. I believe it was something meant to protect Bruce, ultimately, but it didn’t work.” Alfred’s psyche is more complicated than certain comics allow for, Snyder says. “I see him as someone who hates what his son does, but respects him for it tremendously, like the father of a cop. You want him to be safe, and you’re proud of him, but maybe you wish he didn’t put himself in danger.”

Snyder says a truly modern, post-post-9/11 Batman can’t simply exist in Gotham, because the threats of our world — hate crimes, mass shootings, terrorist attacks — have expanded into small towns all over the nation. Romita Jr. agreed. “Yeah, Gotham’s super-villains can get Batman in the city, but in our comic, people in a diner are a threat to him because they’re desperate. A bus driver can get him. So can a crossing guard.”

All-Star will also see cameos from well-known and “Z-list” heroes and villains, who will come out of the woodwork to either aid Batman during a crisis, or take their best shot at him for Two-Face’s money.

Snyder and Romita Jr. hope that by placing Batman in a rural setting, All-Star will deliver the message that although violence and evil can reach us anywhere, heroism can too.