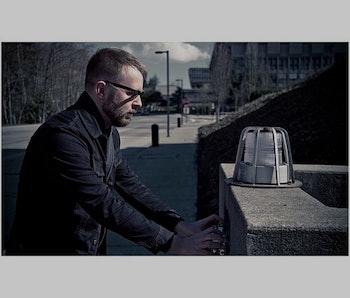 The publishing industry has always an uneasy relationship with trends. Not all that long ago, we were bemoaning the existence of ebooks and the death of print. But books persist, and publishers continue to grapple with the mystifying tastes of readers and how to sell books in a world that is increasingly video-oriented. Enter the controversial art of producing a cinematic trailer for a book. Examples of this trend are here, here, and here.

Some authors think they’re awfully cheesy, while others see a unique marketing opportunity. Inverse spoke with Jamieson Fry, a filmmaker who inadvertently became one of the top producers of book trailers today.

You’re pretty much the main guy in book trailers right now. How did you get into it?

I got started in 2009. My wife, who is also a writer, had a connection to Dan Choan, who had a new book coming out at the time called Await Your Reply, and they wanted to do something different, a video promotion. At the time I was doing music videos, we had no idea what book trailers were. The only book trailer that even stuck in my mind was the original one for Scientology. That was my only reference, the stuff online was pretty uniformly awful.

So then we read the book, it was an awesome identity thriller, and we definitely wanted to do it. He had a really tiny budget but I was able to cajole people into working for very little money to get a skeleton crew together, and it was really fun. Once that was out there were started getting interest from other authors or their publicists who would reach out to us, and that started the incredibly strange book trailer niche section of my life.

Do you typically work more with the author, or a publicist?

It’s totally random. Some authors contact us directly, like TC Boyle, sometimes it’s their publicist who contacts us, and in either case we get an email asking about the process and it all boils down to the same thing. We give them a ballpark budget and estimate—these are small, like low budget music videos— and we ask to read the galley first. If we like it, then we pitch something specific. It usually takes about 8 weeks.

So you look for something you really like about the book or project before you take it on.

There’s a lot of mixed attitudes toward book trailers in the publishing world. Some writers are very opposed to them. Have you encountered any reluctance or negativity from authors?

We aren’t hitting up authors trying to sell them on the idea of a book trailer, so we don’t run into that. We’ve had cases where an author wrote to us like ‘I gotta be honest, I thought this was a really stupid idea but I love what you made’, so that feels really good.

At the same time, I hear all the complaints and I think they’re completely legitimate. There’s one side of the argument that is reading is the primary experience, you’re already to tarnish it by trying to create a video about. The experience of reading is inherently much richer than watching a video, so it’s weird.

There’s also the cost-benefit analysis, how much publicity does it really generate, how much that publicity turns into sales. My response to that is that it’s really not my business, I create the media, I do my best to make that cool piece of art. But for it to be truly successful, it’s not enough to just make something cool, it has to be part of the cadence of the marketing. Sometimes publishers just put them on Youtube with a hashtag, and no one’s ever going to find it.

How do you choose that one detail that turns into the trailer?

The guiding principle I have is, the way a book sticks with you is a weird limbo between a dream and a real memory. Like you remember a movie differently than you remember a book. So I’ll read a galley and what sticks with me the next day or what I dream about or what impression it leaves, I try to capture that.