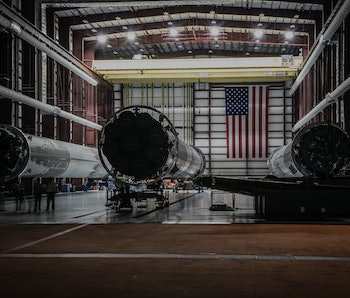 Tesla and SpaceX will not combine, Elon Musk, CEO of both companies, confirmed in a Tesla investor call today.

“There’s not a strong rationale to combine SpaceX and Tesla,” Musk said, unlike his previous merger — apparently, “there is (rationale) for Tesla and SolarCity” to combine.

Musk is referring to a deal for Tesla to acquire SolarCity (a company that Musk sits on the board for) in an all-stock buyout that has been called crazy, bad for business, unethical, sound long-term thinking, and everything in between. Apparently, though, a single Musk-backed entity that controls a green future and the future of space transportation just isn’t in the stars.

“(The relationship) is really quite tenuous for SpaceX and Tesla,” Musk said. “it’s not enough to merge into one entity.”

Musk is still the common thread between the two companies, and seems to be splitting his time exhaustively between their groundbreaking ventures.

It’s understandable why mergers have been on investors’ minds since the SolarCity buyout offer. The SpaceX clarification came after an investor question about the combination. The investor cited Tesla’s need for better GPS tracking, and how SpaceX could solve that by sending satellites into lower orbit.

That may be true, but it’s not enough for SpaceX or Tesla to pony up the money and buy one of the companies. Combining the two would be highly unfeasible solely because of how different each company’s goals are, especially with a solar business in the mix as well. They are both green and run by Musk, but it ends there.

More like this
Science
6.27.2022 8:45 PM
NASA found the crash site of the rocket booster that hit the Moon in March
By Kiona Smith
Innovation
7.2.2022 6:00 PM
Are self-driving cars safe? The tipping point rests on a psychological illusion
By Jean-François Bonnefon and The Reader
Innovation
7.1.2022 10:00 AM
Robots are ready to get touchy-feely
By Sarah Wells
Share: