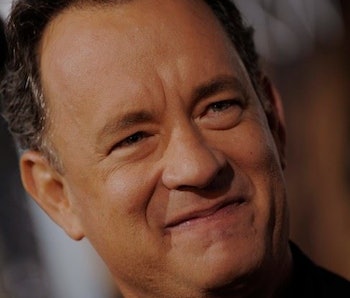 If you’ve been to a PG-13-or-up dramatic film in a multiplex recently, you may well have been granted a rare gift. You couldn’t have bargained for it, but for the price of admission, you got a screening of the year’s greatest comedy thrown in with the deal: the “Official Trailer” for the newest Tom-Hanks-starring, Ron-Howard-directed Dan Brown adaptation, Inferno.

If you know anything about the Brown oeuvre, you may wonder what happened to the proposed adaptation of The Lost Symbol, the third novel in his Robert Langdon series, which also includes his millions-selling The DaVinci Code and Angels and Demons. That appears to have been abandoned during development, or was just turned in too late. Inferno, the Hollywood goon squad seems to have declared, is much more ripe for the box office.

One can see why from one viewing of its busy-as-hell, perpetually ludicrous trailer, which begins with Ben Foster (where my Flash Forward fans at?) seemingly in age makeup, dropping to his death from the top of a building.

What’s the secret Foster died to protect? Oh man, it’s some dark shit, for sure — but you’re gonna have to stick around for a bunch of analyses of paintings before you find out! Also, there’s going to be a bunch of Hanks-as-Langdon talking about the text after which Brown shamelessly named the novel, Dante’s Inferno.

“Dante defined our modern conception of hell… 700 years ago,” Hanks/Langdon mansplains to co-star Felicity Jones, checking out a slide-projector-rendering of a painting, which Foster had a picture of in his pocket. We see him go through some rapid-fire earnest mental detective work. What does it mean? “Dante…Dante’s death mask…YES!”

From then on, nearly every line picked out of the movie for the trailers precedes to narrate what is happening in the plot. “We’ve got to get to Florence!” and “I have no memory of taking that mask!” Hanks-as-Langdon asserts grimly, after seeing surveillance-camera footage of himself stealing Dante’s mask, the one he’s been searching for, from the museum.

The trailer makes a bold, psychedelic move to evoke the ensuing disorder after the plot exposition. “Everything is out of focus” Hanks says, shaking his jowls, bugging the fuck out; Illuminati creeps in bird masks and flames appear, and they are… out of focus! We see Hanks tweaking out in some Italian train berth, turning fitfully, and we guess that similar scenes take up about 40 percent of the movie.

“Professor, you are seeing visions, aren’t you?” says some guy — who looks, of course, like he knows more than he’s letting on — to a queasy-looking Hanks. Damn, being a Dante scholar (and to cite Langdon’s real fake title, professor of “religious iconology and symbology”) sure is trippy!

Then, we get back to the slide of the painting. “Look, look, look… this is not in the original painting,” Hanks says, encircling a hell-dweller’s pair of severed legs with a pointer. “Here another one,” says Felicity Jones, Hanks’s proverbial Doctor Watson, gesturing ominously to sideways capital lettering reading “PROPHECY.” The music hisses ominously — this is the dramatic climax of the trailer.

It’s the Brown-iest Brown shit ever, laid out so perfectly and sincerely in this epic trailer, which spells out the entire movie for you in the most literal terms (“They’re going to wipe out half the world’s population unless we find this virus!”) Inferno may be the movie which sets up Dan Brown adaptations, for good, as a hilarious farcical franchise, over-the-top enough to create various levels of tongue-in-cheek fandom.

Unfortunately, it’s not quite as action-packed as your favorite over-the-top franchise — say, Jason Statham-core or the Fast and the Furious. You’re going to have to find a way to enjoy movies that are basically National Treasure for Dummies, but for dumb adults with truth-er inclinations. You’re going to have to get into being really bored. Most of the major drama will take place around overhead projectors and museum display cases.

But if you’re into movies that are kinda like The Ninth Gate, you can probably light up and enjoy this intrigue. If not, you can at least get the lion’s share of the ridiculous experience in the glorious two-and-a-half minutes that is this magnificent trailer.

Inferno will make a bunch of money in theaters starting on October 28.