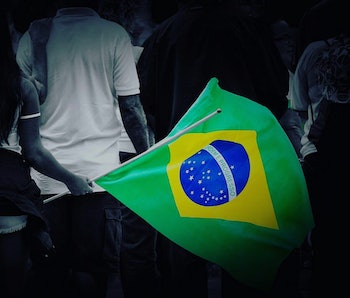 All eyes at this year’s Rio Olympics will be on South African world champion Caster Semenya — consistently misrepresented as a transgender woman or called a hermaphrodite — who is legally recognized as female and, more importantly, identifies as female. But it’s believed that she is hyperandrogenous — her body naturally creates a high amount of testosterone. In 2011, in response to controversial claims that Semenya was competing with an unfair advantage, the International Association of Athletics Federation decided to set the testosterone threshold at 10 nmol/L for female athletes. The IAAF later suspended this rule because scientists have been unable to prove women with these levels of testosterone have a competitive edge; the organization is expected to revisit the subject in 2017.

Semenya’s case is indicative of the complicated way gender has become a controversial, hugely important role in sports — and nowhere is that more apparent than at the Olympics. During Friday’s opening ceremony for the 2016 Olympics in Rio de Janeiro, two athletes will enter the arena representing their countries and personifying the pinnacle of their sports. They will also be transgender athletes and the very first to benefit from new guidelines on sex reassignment and hyperandrogenism determined at a 2015 International Olympic Committee consensus meeting. While one of the athletes is rumored to be competing for Team Great Britain, identities of the athletes has yet to be revealed.

The desire to compete anonymously is easy to understand — the road towards the Olympics has been a stigmatized one for transgender athletes who have long been accused of cheating because of misconstrued assumptions about what happens to the body once an individual begins hormone therapy. This wariness is typically reserved for those who transition from a male identity to a female one — however, while men generally have an inherent performance advantage over women due to height and muscle mass, there is no scientific evidence that transgender women have an advantage over other women in athletics. The introduction of estrogen to the body often leads to a decrease in muscle mass, fat storage, and oxygen-carrying red blood cells — not super-strength.

“I have seen no indication to this point that trans people, male or female, have any advantage whatsoever at that level,” former Olympian Caitlyn Jenner told Five Thirty Eight in a conversation concerning the Olympic committee’s 2015 decision. “There’s no trans person out there, male to female, that’s out there dominating. It just doesn’t happen.”

What makes these new guidelines so unique — the International Olympic Committee (IOC) is careful not to call these “rules or regulations” — is that transgender athletes are no longer required to have surgical anatomical changes, a previous requirement that the IOC now describes as “not necessary to preserve fair competition.”

Additionally, male-to-female transgender athletes must have undergone hormone therapy and have a total level of male testosterone in their blood that is below ten nanomoles per liter for at least one year prior to their first competition. Previously, two years were required. Female-to-male transgender athletes can compete without restriction. Both are required, for “sporting purposes”, to have a certain gender identity for a minimum of four years if they want to compete.

“Since the 2003 Stockholm Consensus on Sex Reassignment in Sports, there has been a growing recognition of the importance of autonomy of gender identity in society, as reflected in the laws of many jurisdictions,” reads the IOC consensus meeting report. “It is necessary to ensure insofar as possible that trans athletes are not excluded from the opportunity to participate in sporting competition.”

The 2003 Stockholm Consensus on Sex Reassignment in Sports, held prior to the 2004 Olympics in Athens, was the first time the IOC had formally allowed and acknowledged a transgender athlete’s right to compete. However, they were required to have legal recognition of the gender they were assigned at birth, to have gone through at least two years of hormone therapy, and had to have had gender reassignment surgery.

While a step towards progress, this was still controversial. In 2014, the Human Rights Council called the requirements “inconsistent with medical guidelines” and called out the requirement of legal recognition of gender identity as unfair to those whose identities were “banned by law in many countries.” Furthermore, the requirement that genitals be altered for competition purposes was not only intrusive to the privacy of the athlete, but unscientific. The expense of surgery was and remains a barrier for many athletes, and there is no evidence that genitals have a bearing on athletic performance.

This focus on genitalia seemingly appears to be a relic of the International Olympic Committee’s longstanding enthusiasm for upstanding a rigid gender binary in the name of fair competition. Until the late 1960s, female competitors — and not male athletes — were required to “parade nude” for a panel of doctors to verify that they (at least visually) were female. This practice was discontinued before the 1968 Mexico City Olympics, where the change was made to chromosomal tests — only athletes with an XX set of chromosomes could compete as women.

This practice of gender verification was continued until the 2000 Summer Olympic Games in Sydney, Australia. It became increasingly obvious that chromosomal testing could unfairly single out athletes whose genetic makeup, while not exactly XX or XY, did not give them any sort of competitive advantage. Again, it’s not the chromosomes or the anatomy of an individual that dictates physical advantage — it’s an individual’s hormones.

“Over time, it therefore became evident that laboratory based methods of determining an athlete’s sex were simply inadequate for the task at hand,” writes J.C. Reeser in the British Journal of Sports Medicine. “The attempt to rely on genetic testing methods of sex determination had opened up a veritable Pandora’s box of problems for both athletes and officials.”

Female athletes were no longer required to undergo this invasive form of examination, but that doesn’t mean that the IOC ceased the practice entirely. At the 2008 Beijing Olympics, certain athletes were required to be evaluated by an endocrinologist, gynecologist, geneticist, and psychologist to determine their “real” sex. This, reported The New York Times, was a process that “only athletes whose gender has been questioned” had to undergo.

Some academics posture that this emphasis on the physical presence of genitalia as an indicator of gender goes back to a misunderstanding of how hormone therapy works and a fear of doping. In 2006, University of Manitoba professor Sarah Teetzel wrote:

“The challenges to sport that transgendered participation at the elite level creates is often related to, and confused with, anti-doping issues because of fears that the transgendering process provides athletes with the same type of advantages that athletes gain from using substances and procedures banned under the World Anti-Doping Code.”

While the IOC certainly appears to be on the right track towards inclusive equality, that doesn’t mean that there still isn’t controversy underlying their approach to gender, particularly when it comes to athletes who are intersex: People born with characteristics that don’t fit the binary idea of what is a man or woman.

Which brings us back to Semenya’s case. The IOC, who often looks to the IAAF as a model for fair play, came up with a lackluster guideline after the controversial investigation: “Rules should be in place for the protection of women in sport and the promotion of the principles of fair competition.” In other words, the IOC says that if the testosterone levels are too high to be considered “women’s,” then the athlete should compete in the male competition. Semenya appears to have been fully approved to compete with the other women — but commenters have expressed concern that her potential victories will be marred with comments that her natural testosterone levels still means she cheated.

Overarching all of this conversation is a larger question that hinges on the fact that the modern iteration of the Olympics is expressly designed to focus on men and women. However, society is moving — albeit ever so slowly — towards a culture that understands that the idea that there are only two, binary genders is an illusion. How much longer can the Olympics continue to divide itself up between men and women? And when that day comes, how will its organization reshuffle?

If history is any example, we’re not likely to know before social pressures push the IOC to make a change. Women weren’t even allowed equal participation in Olympic sports until 2012. The new guidelines for transgender athletes applied to this year’s Olympics is a step in the right direction, but it’s how we address the next Olympics that is bound to be even more revolutionary.

More like this
Science
5 hours ago
Earth’s most extreme farms will help scientists grow food in space
By Daniella McCahey and The Conversation
Science
3 hours ago
Behold! Hubble snaps a picture of our galaxy’s misshapen future
By Universe Today and Carolyn Collins Peterson
Science
2 hours ago
The best dinosaur show of the decade is based on ancient clues and fossils
By Tara Yarlagadda
Share: