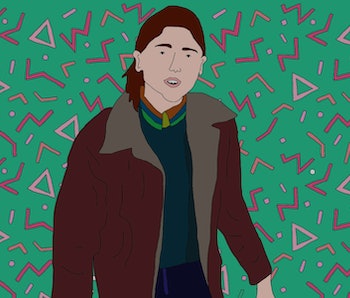 Any period piece on television lends itself to an extra layer of scrutiny, beyond the typical plot twists and gratuitous nudity; namely, does it sell the era we’re supposed to absorb? Some are easier to fudge than others – who’s going to know the petticoat trends in the exact period of the latest Jane Austen regurgitation? But shows like Netflix’s ‘80s-inspired hit Stranger Things face a more profound challenge. How do you sell a decade that most of the world has already lived through, or can at least easily access through media?

Where Mad Men’s seemingly 3,000-person props and costume teams set the industry standard for how legit a 20th century period piece can be, Stranger Things rises to the occasion not only in music and architecture (which it does so in spades), but most importantly in the series of baffling layers and patterns that befit a true ‘80s piece.

Take our big-eyed, unfairly slut-shamed monster-slaying protagonist Nancy Wheeler, whose need for acceptance translates into forty layers of ‘80s sleeves, patterns and charm jewelry throughout the series. Nancy brings a James Spader-level of preppiness to the table in a way that would inspire variations and parodies of kids with in-ground pools and something to prove for decades to come.

Then there’s everyone’s newest fashion icon and role model Barb, Nancy’s loyal maverick pal who is guaranteed will slay the game the second she hits college, as all late-blooming bombshells do. Although lower on the high school food chain than her counterpart, Barb doesn’t need to try to make thick glasses, cropped hair and painfully unironic mom jeans work in her favor, pairing it with the sickly pastel sweaters that would become second-string Easter outfits in the nineties as the cuffs frayed.

Barb’s Sunday best looks like Drew Carey’s secretary’s Monday worst, and she still pulls it off with a blend of attitude and insecurity that make even the poorest high school outfit choices work. (That’s what Im telling myself about the dutifully straightened hair and Paul Frank wardrobe I had going in the late 2000s).

Not to be outdone, the conspiracy-busting boys of the series bring their A-game in the form of leather jackets, gratuitous ties and all plaid everything that gives the impending Twin Peaks reboot a run for its money. Most characters have a wardrobe that could sneak just as easily into the mid to late ‘70s category, but this isn’t a weakness in storytelling — in fact, it’s a subtle suburban nod to the art of the hand-me-down (she writes, wearing an American Eagle top her older cousin pawned off to me in 2010).

And then, of course, there’s Winona Ryder’s character Joyce, who brings the ‘80s mom fashion that many thirty-somethings still find themselves inevitably turned on by because of that time they accidentally walked in on their best friend’s former prom queen mom changing into her PJs at a sleepover. Ryder brings the hot mom heat on top of a career-reviving performance in a series of alternatively too-tight and bizarrely baggy clothing that forced a generation to imagine what the actual shape of a grown woman’s body was.

Nostalgia aside, the most critical piece of clothing that tells as much as it shows is Nancy’s too-big high school bra. When asked by Barb if it’s new, Nancy is quick to say no, though the Pacific Ocean sized chasm between her chest and the fabric. It’s here where Stranger Things uses its time period to its greatest advantage — when a show can get a garment to tell a story, you’ve hit on a perfect storm of period storytelling.

In a TV landscape littered with less-earnest efforts at appealing to our weaker nostalgic instincts instead of using it as a storytelling tool, Stranger Things manages to keep its audience binge-watching and keep three tabs for mom jeans open alongside their Netflix queue. Not too shabby, gang — but seriously, the pastel sweaters need to go.