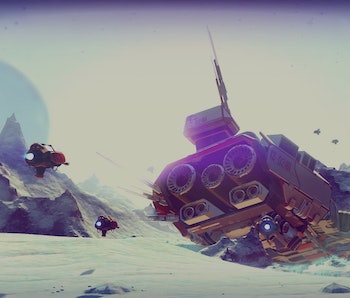 While the community is still holding its collective breath until developer Hello Games officially releases No Man’s Sky on August 9, the early footage from the game (which eventually sold on eBay for a reported $1300) has left some folks comparing NMS to Bungie’s Destiny, a previously vaunted title that released to some measure of disappointment from the fans who were expecting something more than what they received.

In the run up to its September 2014 release, the level of excitement for Destiny was practically palpable. Bungie’s shooter was riding the hype train on the strength of the developer’s beloved previous release, Halo. Heading into Destiny, there were lots of secrets surrounding the title’s story details, its economy, setting, and even what exactly players could do beyond run around and shoot things.

Of course, the combat looked incredible and Bungie was investing more money than any other game in history, around $500 million, to ensure that the game was a breathtaking experience. The developer’s history was enough to get a horde of buyers to put their faith in the final product.

Then, Destiny released and it wasn’t the gaming revolution players were expecting. The universe was smaller than had been alluded to, and players found a deficit of options beyond spelunking the same dungeons over and over again. Destiny relied almost solely on a grind-heavy loop that was incentivized by newer and more powerful loot.

People who were expecting a stirring narrative or some immersive RPG elements were sorely disappointed in the result. They felt that Bungie had promised something much more innovative than it delivered, and the backlash was immediate.

In spite of what gamers had hoped for, though, Destiny was exactly the game that Bungie promised, a kinetic experience in which, “each player’s goal is to gear up, become more powerful, and face even greater challenges for a chance at the most powerful and awe-inspiring rewards Destiny has to offer.

In other words, Bungie promised loot-heavy gameplay — and that’s exactly what they delivered. Unfortunately, thanks to the veil of secrecy, folks had come to eventually hope for and even expect things that Bungie never explicitly promised.

So, back to this weekends big leak.

After he got his ridiculously expensive copy of No Man’s Sky, redditor daymeeuhn streamed the first 24 minutes of gameplay and released it on his DailyMotion page (it’s since been removed). The resulting reddit “spoilers” thread had to be locked by reddit’s moderators to stop the panic from those terrified that the expansive scope of the game was all a ruse.

In the wake of the footage and daymeeuhn’s accompanying remarks, people began to accuse No Mans Sky chief developer, Sean Murray, of outright lying about No Man’s Sky. In spite of a later post in which daymeeuhn was quoted advising gamers against cancelling their pre-orders, the seed of doubt had been planted in the minds of several players who’ve been unsettled by footage that appears repetitive and the revelation that there’s no grand story behind each player’s journey.

Sean Murray Never Said He Was Holding Back

In a vacuum of information where “it’s awesome” is the most commonly repeated fact about a title, gamers have a tendency to fill in the gaps with their own wishes. On release, the clash of “what we want” and “what we get” can be devastating. When it came to Destiny, for example, the twitchy, tactical violence at the core of the title couldn’t overcome the lack of features that people desired.

For some, that might be the case forNo Man’s Sky. Yet, the distinction between Bungies shooter and Hello Games’ upcoming explorer is simple: Sean Murray has never claimed to be keeping anything a secret (beyond what’s at the center of the Universe).

For Murray, No Man’s Sky has been about the journey from the very beginning. When he claims that there’s a lot to be discovered in the game, it sounds as if it’s not because he’s trying to withhold some aspect of the gameplay. It’s simply that the territory is so huge its impossible to experience all the permutations of the game’s procedurally generated flora and fauna.

With Destiny, there was always the vague promise that Bungie’s universe held something for everyone. That… wasn’t really the case, as it could never be. Sean Murray and Hello Games have never made the mistake of claiming that No Man’s Sky was anything more than a game of solitary exploration aimed at giving players the sensation of being the first to set foot on an alien world.

Hoping for something more than that is just setting yourself up for disappointment.

More like this
Gaming
Jan. 23, 2023
Everyone your main character can romance in Persona 4 Golden
By Hayes Madsen
Gaming
2 hours ago
You need to play the best time-loop game on Steam ASAP
By Willa Rowe
Gaming
4 hours ago
MLB The Show 23 Release Date, Cover Athletes, Platforms, and Pre-Orders Explained
By Joseph Yaden
LEARN SOMETHING NEW EVERY DAY.
Related Tags
Share: