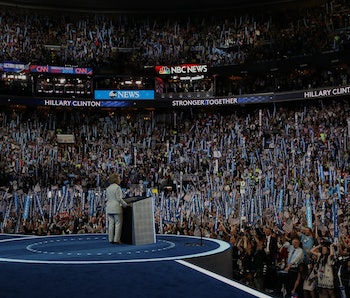 After 9/11, a new imperative took hold in law enforcement agencies across the country: it wasn’t enough to arrest and prosecute terrorists after an attack — the attack itself had to be prevented.

In pop culture, this mindset is often presented as an example of hubristic overreach by governments or people with authoritarian leanings. In Captain America: Winter Soldier, for instance, Nick Fury tells Cap about a new initiative to prevent attacks before they occur.

“The satellites can read a terrorist’s DNA before he steps outside his spider hole,” says Fury. “We’re gonna neutralize a lot of threats before they even happen.”

“I thought the punishment usually came after the crime,” responds Cap.

“We can’t afford to wait that long,” says Fury.

In the movie, the program to kill millions of people based on an algorithm in the hopes of saving billions turns out to be a terrible idea. It’s just one of dozens of fictional examples of how the illusion of perfect security distorts society by introducing impossible standards of safety at the expense of personal and social freedom.

Probably the most famous example of punishment before the crime is Minority Report, the Philip K. Dick story-turned-movie and one-season-and-done television series. In that universe, people are arrested for “pre-crime,” that is, crime that the government has determined they are about to commit but haven’t yet carried out. The turn comes — spoiler alert — when an agent tasked with enforcing pre-crime arrests becomes the target of the system – wrongly, at least from his point of view.

The obvious lesson here is that although the promise of total safety can be alluring, the unintended consequences can be far-reaching and disastrous.

Enter Hillary Clinton. (It should go without saying that Donald Trump is worse on this issue than Clinton, though this article will focus on her recent comments.)

On Thursday, Clinton accepted the Democratic nomination for President. In her speech, she made the following promises.

“I’ve laid out my strategy for defeating ISIS,” she said. “We will strike their sanctuaries from the air and support local forces taking them out on the ground.” Nothing controversial there.

Then, she stepped into the future. “We will surge our intelligence so we detect and prevent attacks before they happen,” she said.

Again, this philosophy, called “prevent” in law enforcement circles, isn’t new or unique to Clinton. It became a major FBI priority after 9/11, and was the theoretical foundation of some of the worst NYPD abuses that targeted Muslims all over the East Coast.

In the Obama administration, the catchphrase “Countering Violent Extremism” has become ubiquitous, and shares a lot with the “prevent” approach to policing. In a recent article in Psychology Today, J. Wesley Boyd offered a harsh critique of CVE, drawing parallels between the administration’s current approach and COINTELPRO, considered a period of large-scale abuse by the FBI in the 1960s and early ‘70s.

“Currently, the FBI, in collaboration with the National Institute of Justice, the Department of Homeland Security, and other government agencies, is again launching programs that are at best doomed — and at worst designed — to disrupt the Muslim communities in cities where they are launched,” Boyd writes.

“Under the umbrella term Countering Violent Extremism (CVE) the programs include attempts, with no basis in evidence, to predict who might some day become violent due to a passionate investment in a cause,” Boyd continues. “In the absence of evidence, the agencies are now asking people close to young Muslims to report to law enforcement, including local and federal enforcement agencies, on kids who they just think (note, without any knowledge of what the actual signs are) might be on a path towards extremism.”

Boyd’s critique of CVE can be equally applied to Clinton’s proposal of promising to “surge our intelligence” under the pretext of preventing future attacks. Determining who will engage in political violence is notoriously difficult, and relying on indicators like political speech and presumed thought patterns is both unconstitutional and unreliable.

A better approach involves attempts to minimize violence throughout society, whether based on political beliefs, misogyny, racism, or any other structure of oppression. Specifically focusing on Muslim youth, and the violence a small percentage may or may not commit, is both morally repugnant and tactically counterproductive. Similarly, it is a tragedy that Muslims are talked about in mainstream discourse primarily as “the best” people to report threats before they happen, as though Islam is little more than a counterterrorism tool. Even well-intentioned attempts to frame Islam as a religion of peace often fall into a bigoted framework that accepts violence committed by Muslims as a unique and existential threat to the United States.

With her most recent comments, Clinton has shown that she will continue to focus intelligence and law enforcement resources disproportionately on Muslims, while offering a nominally inclusive broader message. That is a mistake, both morally and tactically.

No one, not the FBI or the CIA or the NSA, has a crystal ball they can look in to determine who will engage in political violence. Neither do psychologists. “We do not read minds, and we know that none of us can predict the future,” concludes Boyd.

Captain America knew it. Hillary Clinton should know it too.

More like this
Culture
3 hours ago
Netflix has the perfect sci-fi thriller to kick off your spooky season
By Jake Kleinman
Culture
Oct. 2, 2022
Rings of Power's biggest weakness makes it the anti-Game of Thrones
By Jake Kleinman
Culture
Oct. 1, 2022
Why Patagonia’s “purpose” model reveals fashion’s biggest hurdle to sustainability
By Ken Pucker and The Conversation
Related Tags
Share: